Sync 4 | Page 4 | Ford Explorer - Ford Ranger Forums - Serious Explorations
Menu
Log in
Register
Install the app
You are using an out of date browser. It may not display this or other websites correctly.
You should upgrade or use an alternative browser.

I just got a wireless CarPlay dongle for my 2020 explorer limited. It works every time I start up the truck. Only thing it don’t mute the voice prompts during a phone call. Also it get stuck in boot up mode if you put your truck in reverse before its fully booted up. Other than these two drawbacks, it works fine even with voice activation. If you are going to use the google maps for navigation, just delete Apple Maps and when using voice to navigate, use the word “on google maps “ and the end of each command i.e. press the voice button and say “ go home on google maps “. The two issues, I hope they will fix in the next upgrade. The name of the dongle is “Carplay2air” or Carplay2air.com.


Touchscreens will measure as huge as 15.5 inches, and the Sync 4 system will come with smoother over-the-air updates and multitasking screens.


Ford
Ford is bringing big updates to the increasingly big screens in its upcoming vehicles. Some of those updates will come in the form of an advanced version of the over-the-air technology that the company promises will be "virtually invisible to customers." The other will be through the introduction of Sync 4, the latest version of Ford's in-dash software, to select Ford vehicles that the automaker has not yet named.

Since the 2016 model year, Ford vehicles that have the Sync 3 with navigation infotainment system have been updatable using Wi-Fi or with a USB drive that has the new code on it. With this now improved over-the-air (OTA) service, when Ford pushes an update to vehicles, the cars will download the new software in the background but keep running the current software until it can activate the new version. This update method is "something that no other vehicle, or even some popular smartphones, can do today," Ford says.

2020 Ford Explorer's Giant Vertical Touchscreen
The new OTA tech will be available on most redesigned Ford vehicles in the U.S. starting in 2020, Ford says. 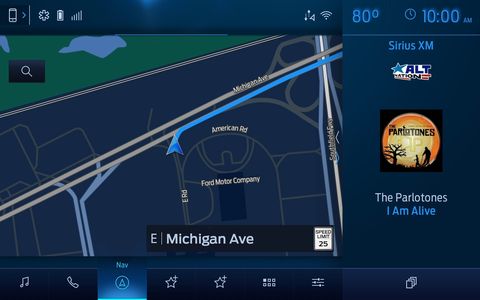 Ford
Sync 4 for New Big Screens
Continuing with the wireless theme, one of the big improvements in Sync 4 is cloud connectivity for improved performance, as well as cord-free compatibility with Apple CarPlay, Android Auto, and Sync AppLink. The stronger cloud connection will let drivers have easier conversations with their cars to search for information on restaurants, the nearest electric-vehicle charge station, or sending texts or emails. Cloud connectivity will come standard with vehicles that have Sync 4. Wireless charging for phones will also be available.

Will the 2021 explorer and aviator have sync 4?

Nobody knows yet. Considering the 21 PUI doesn't have it, I'd go with no.

david sherk said:
Why is ford so secretive about which vehicles will have sync 4 in 2021
Click to expand...

Tks but im interested in 2021 lincoln aviator. I wont buy it if it doesn't come with sync 4

david sherk said:
Tks but im interested in 2021 lincoln aviator. I wont buy it if it doesn't come with sync 4
Click to expand...

The Order Guides should be out soon. They will have that info.

So far I only heard about Mach-E getting SYNC 4, no any other 2021 vehicles were mentioned yet. Well, maybe F150? It is very important vehicle for Ford and I heard somebody in Ford mentioned about OTA updates capabilities in all-new 2021 F-150. So far, OTA updates were only applicable to SYNC 4.
Regards,
Denis

January 6, 2019
Argentimage
A
D
Siri not letting me use Sync 3 Voice Navigation!