We should of gotten this

If this was the next Explorer, I would buy one. I need something a little more off road friendly than the current one.

The Everest is a big, brawny seven-seat SUV that mixes solid, chiseled styling and contemporary Ford design cues. Up front there is an angular version of the trapezoidal grille and sharp, wraparound headlights. The beltline rises in the rear to make the back appear higher than the front. The rear seems just as chiseled, with the taillights resting in jagged scallops. There is no doubt that this concept means to look rugged, and ready for rough roads – the whole thing looks pretty great.

The truck was penned by Ford's Asia Pacific design and engineering team in Australia, and it was first shown in Sydney last year. Ford's JMC joint venture will build the truck for the Chinese market, and it will be sold at Ford dealers there. The Blue Oval isn't hinting at what powers the production version yet, but it reportedly shares some components with the foreign-market Ranger.

Don't get up any hopes of the Everest coming here. "We have no plans for it at the moment," said Ford spokesperson William Mattiace, about its US prospects.
Click to expand...

This too... 2nd vehicle in the video.


Just call it the Explorer Sport Trac in the US and call it good...

Wow that suv is sexy, I think ford is really screwing the pooch by not selling the ranger and now the Everest here in the US
97 sport 5.0 / 4406/ AVM manual hubs
Complete 2.5 inch magnaflow dual exhaust , 99 front / rear bumpers and tailgate
98 xlt stock
01 sport trac

Looks like a cross between the Grand Cherokee and the Durango, and the Chineese were wanting to buy Jeep and Ram in the bankruptcy years 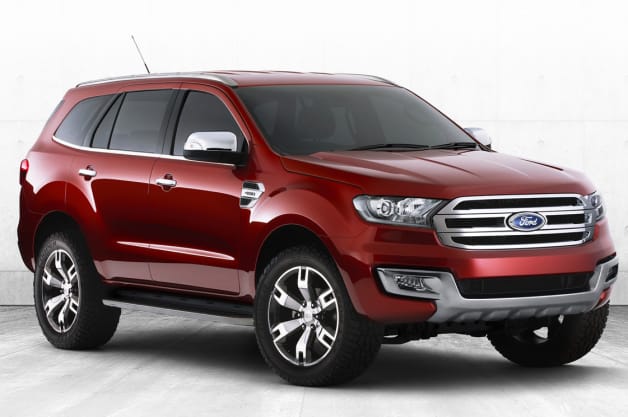 delexploder said:
Wow that suv is sexy, I think ford is really screwing the pooch by not selling the ranger and now the Everest here in the US
Click to expand...

Once upon a time each and every year brought on major styling changes. The designs were timeless and they are still emulating them today.

Let the designers and engineers have some fun, and send the bean counters packing.

Well, the new Mustang looks pretty nice, somewhat Euro-styled, I suppose to appeal to the world market, but still with the classic Mustang styling cues. The designers did a good job.

On the other hand, the team that designed the current Explorer and the new Escape, well, they should have their crayons taken away!

Ford announces that the Fairlane is ready for production.