Good job sir.
You can just leave in the yellow dip stick for testing. When your all done with the correct fluid height screw the metal cap back on.

Thank you vipersinu2
Your tips were great!
Do you know roughly how much I should put back in, I let it drain for 5 days now :O

vipersinu2 said:
Good job sir.
You can just leave in the yellow dip stick for testing. When your all done with the correct fluid height screw the metal cap back on.
Click to expand...

Kinda hard to tell, because you were leaking out of those o rings on the oil cooler.
My cooler was leaking slightly for 1.5 years, i used 9 quarts.

vipersinu2 said:
Kinda hard to tell, because you were leaking out of those o rings on the oil cooler.
My cooler was leaking slightly for 1.5 years, i used 9 quarts.
Click to expand...

Tips on this one would be to use OEM filter as some of the aftermarket fluid intake ports are located high and in the front of the filter. It would be best to have one that utilizes the filter fluid intake on the bottom of the filter that fits necely in the dimple in the transmission pan. Be aware that you will need to get the level correct. Too little or too much will cause problems with the transmission shifting. The level will also be different once up to temperature. Refill while cold up to get a registered reading on the dipstick then cap up and take a ride to get temp up. Leave running in park and take dipstick reading. Fill to fill line. I'd check the level a few more times after a few days. Always check when hot idling in park. Oh, and watch the exhaust pipe near filler hole/dipstick it is HOT.

I am following this thread and staying away from commenting it just to give the new members the floor since I feel like my posts are getting old and boring.

But decided to chime in after all.
I do not believe the flushes are bad, pan and filter drop may be better but we do not really have enough sample data to make a educated decision here.

I've had my car for something like 10-11 years, bought it in 2007 when it had 30-40k miles on it.
Towing every year, plowing snow every year few on driveways, just friends and neighbors.

I had Ford do my first flush at around 60k, then at 120k, then at 182k or so.
At around 213k I was told I need a new valve body. That was the first time I dropped the pan and filter. Since that did not cure the issue and I though that I had a defective "new" valve body, they sent me another one so I opened it again maybe at 215k.

In the end it was bad coils......but got the Mechatronic changed, twice

Then at 254k, I opened it again:
Fluid and filter replacement on 6R60

Fluid after 15k miles including towing and plowing 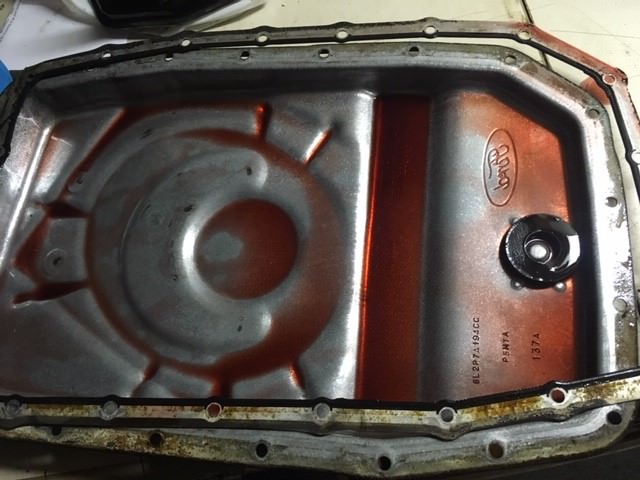 I usually measure how much fluid I collect and refill same amount.

MoonlightGT said:
so ive done a search and cant seem to find much info. has anyone done a transmission pan drop and filter change on a 2006-2010 explorer with the 6r60 6spd transmission? my 2006 EB currently has 62,000 miles and id like to drop the pan and change the fluid and filter. I will be using motorcraft mercon SP with a motorcraft filter and I have a fluid pump to fill it back up. my question is has anyone else done this on their own? or is everyone going to the dealer? how much fluid will I need? just wondering if theres any problems I will run into. thanks
Click to expand...

Yes, I have done it. It's pretty straight forward. Easy to change, especially if youhave a fluid pump. Drop the pan, remove the filter, make sure the o ring came out with the filter. Lube the o ring on the new filter and install. The fill plug is on the passenger side front of the transmission. You take it off and remove the yellow dipstick out before filing. If i remember correctly, it was 6 quarts of motorcraft sp trans fluid. Other than not having a filter neck. It's just like the older rear wheel drive trans changes. Have fun. It's not bad at all.

I went to my local dealer today to pick up a filter, a gasket (just in case I need it) and 8 qts of Mercon-SP.

The parts guy was able to get the correct filter ($51) and gasket ($15) for me. When he asked how many qts of Mercon-SP I wanted, I told him I was only doing a pan drop and a filter change, and that I thought I would need between 3 and 4 qts.

He suggested it sounded low, and he (without me) went out to the shop floor to ask one of the techs. He came back and said the tech said that "We don't do just the pan-drop and filter, we do a complete flush, so I am really not sure how much a pan-drop and filter change would take. I would get 8 qts and return what you don't use".

I explained (to the parts guy) that the Ford shop manual does not recommend a flush because of the thermostatic nature of the fluid path. He (the parts guy) said "that's a whole different story" and really just blew me off (he really didn't want to discuss it with me), so I just completed my purchase and went on my way.

So my question, (like many here on the forum) is:

1. Is there an official Ford recommendation to flush and
2. If so, where (if at all) is it documented?

Could the tech be confusing 6R60 with another transmission?

There is a thermal valve in these transmissions. A flush doesn't clean the filter and it won't go through the cooler either unless the transmission is up to over 180 degrees. That's pretty hard to get while it's hooked up to a machine. Best bet, drop the pan and change the filter. These transmissions will hold up a long time by doing this.

I guess after reading all of these replies that even do it yourselfers are lining up at the dealers for this job. It looks like that is where I'm headed (i'm wearing a bag over my head though).
Gr-r-r-r.....

6r60 trans filters and fluid change is easy as long as you have a pump to put the fluid back in the trans.

Mama's2006EB said:
I think they do it because people seem to neglect the fluids anyways, why not eliminate things most people don't know existed in the first place!! My opinion or yours, they're building cars disposable and harder to work on for the average Joe the plumber in his driveway. Grease for life this, and unserviceable that. I like to work on em and try to every chance I get.
Click to expand...

The 6r60 dotted have a dipstick under the filter cap on the front passenger side of the transmission.

Themightyquinn said:
They do a better job of flushing the xmsn than you can by removing the pan and draining 2 quarts of fluid out. There is a reason why dealers use them. They flush all the crap out of the xmsn, lines, and radiator.
Click to expand...

The transmission flush machines is their lazy way out. They don't get all the fluid out on these transmissions, because they can't get them hot enough on a host or bay to open the thermal valve in them to cycle the fluid through the cooler. These are not electronically controlled valves, so there is no way to activate it.

I had the transmission fluid and filter changed on my 2006 Explorer V8 at a local transmission shop, arguably the best in town - the guy specializes in Fords. He dropped the pan, and replaced the filter with genuine Motorcraft parts, and refilled with Motorcraft Mercon LV. I asked him about this, and he said he always refills them with LV, and never has had a comeback. To drive the point home, he agreed (and wrote on the invoice) that he would guarantee NO fluid related problems, or performance concerns with my transmission. He was that certain, and by all indications, he's putting his money where his mouth is.

Shortly after the transmission service, I had a friend at a Ford dealer re-flash the Explorer with all of the latest upgrades for the PCM.

It has NEVER driven better, or smoother. I now have about 25,000 miles on it since the flush and update, and I'm telling you, it shifts PERFECT, and my gas mileage did not decrease until my exhaust manifold began leaking, and at that point, only by about one MPG. It routinely still gets on average, around 18-19 MPG.

Thanks for the thread, I just bought a 2006 Eddie Bauer version and will be looking to at least drain it, clean the filter and fill it this coming spring. I bought it with 106454miles on it. The fluid is dark but not burnt.