I am big into the "reuse" aspect of "reduce reuse recycle". As such, I always try to look ways to re-purpose old items that still have life in them. With that in mind, I set out to build an intake for my 5th gen that didn't cost a fortune, and hopefully might help some of you save some money as well.

First, I needed the main intake pieces. Initially, I looked into aluminum piping on eBay and amazon. There are options there of course, but more than I wanted to spend, and that doesn't really fit into my "reduce/reuse/recycle" mantra here. So I went off to Craigslist, OfferUp, Facebook Marketplace, etc. to look for old intakes for other vehicles. This is a gold mine for used auto parts, especially old performance auto parts.

I needed to find something that had bends that would work, was the correct size (3" or larger ID), and minimal items or issues that would need to be fixed/modified. A little more difficult than just finding any old intake, but not too difficult. What you are looking for is something with at least 12"-18" of straight, with at least one 90* bend at the end of that straight, basically like a capital "L"

With that in mind, I finally found a great candidate. This is a Volant intake for a 02-05 Jeep Liberty 3.7L, with a splash/heat shield. I was able to grab it for $40 off OfferUp. 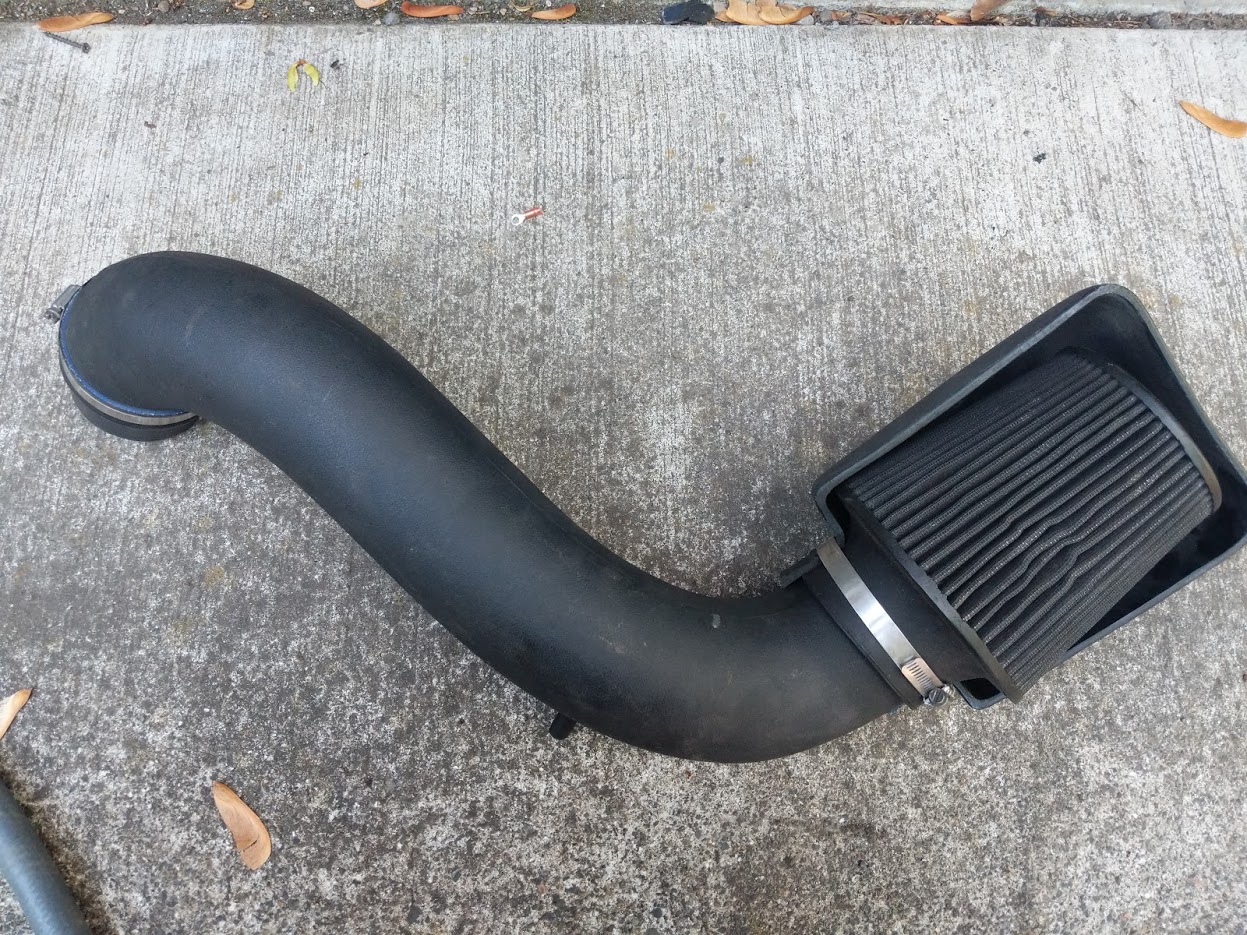 Picture of other side.

This was perfect for a number of reasons:

First, I cut off the nipple off the intake, and used a 1" hole saw where the nipple used to be. This is where the temperature sensor bung will go. 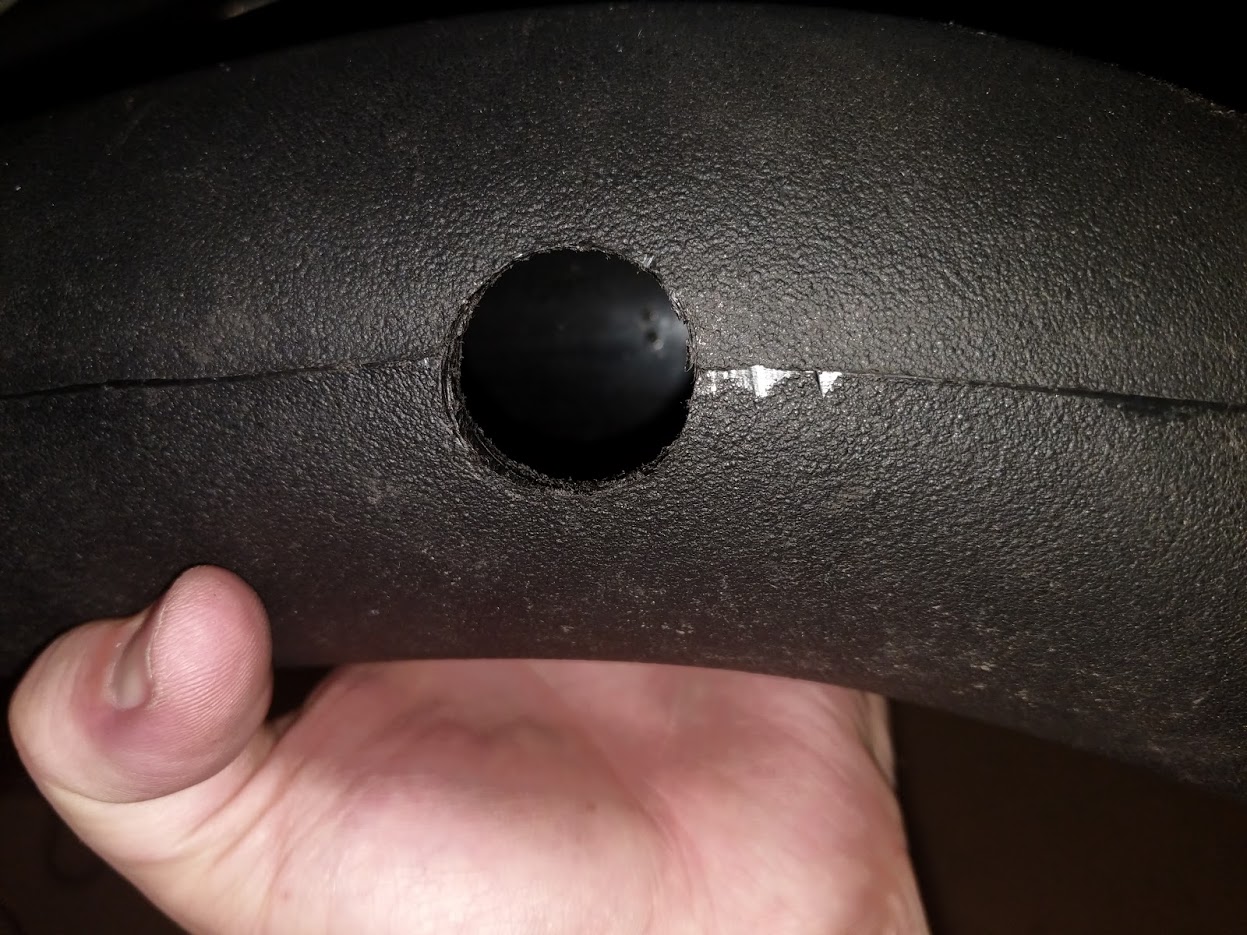 Next, I needed to 3D print a new bung for the temperature sensor. Using the stock plug as a guide, and armed with some calipers, I created my first "mockup" version. 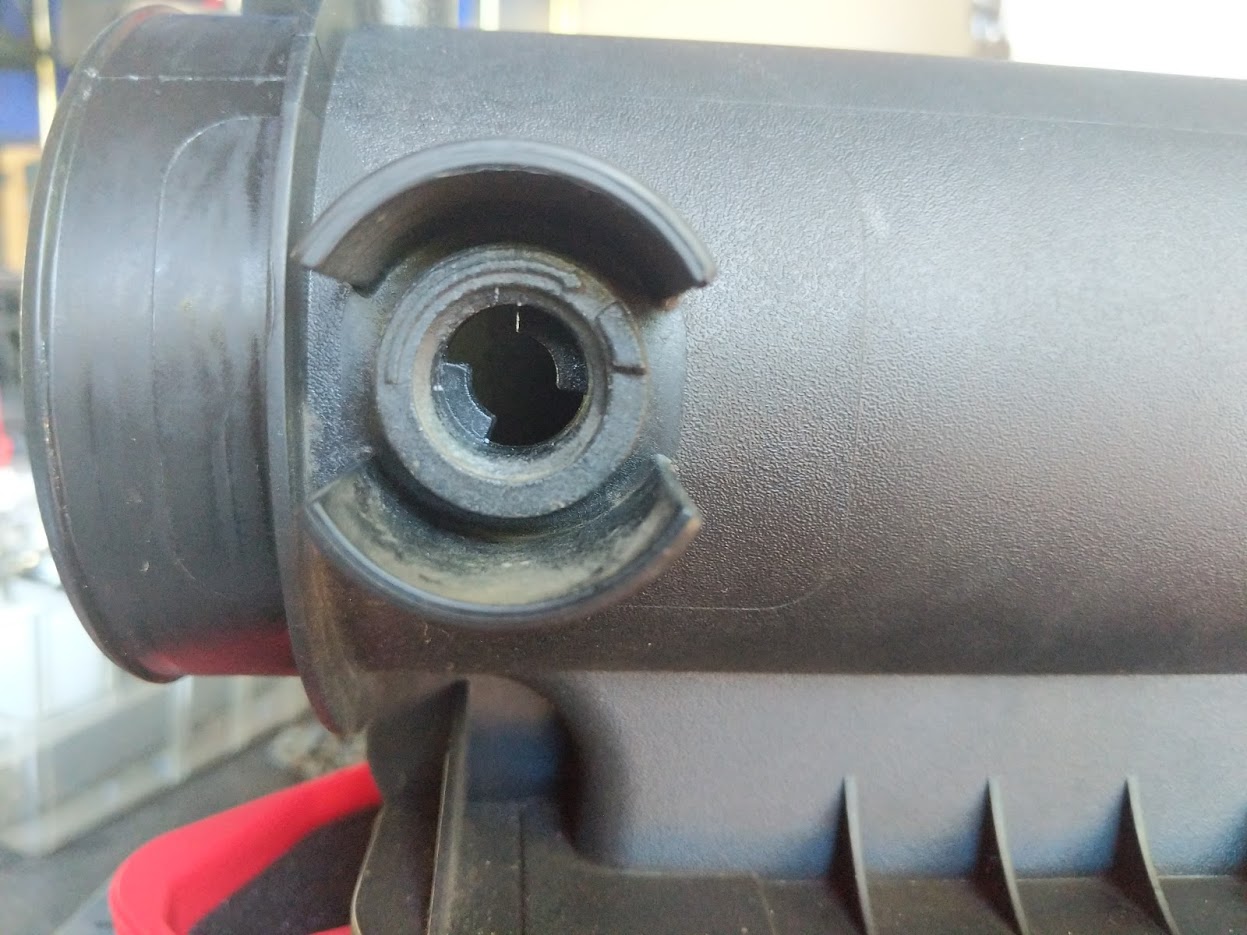 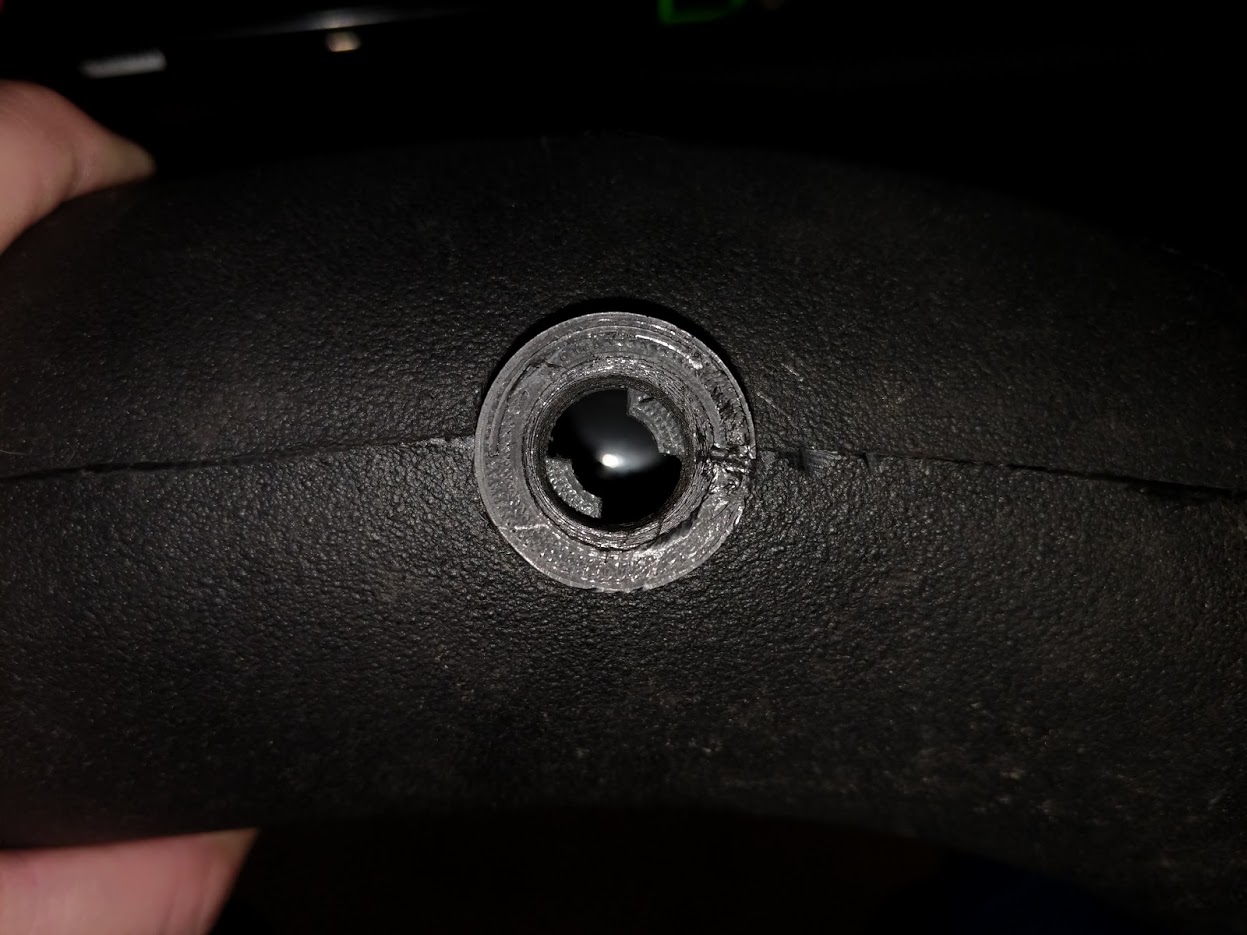 I also took this time to measure out how long my main intake piece would need to be, and also mark a line for cutting later. A rubber band worked great for both of these tasks. It made it easy to make straight line (and adjust easily), as well as mark the line just by running a sharpie along the rubber band. I wanted to cut to be straight, but also leave enough space on the elbow I was cutting off to be able to add a coupler. 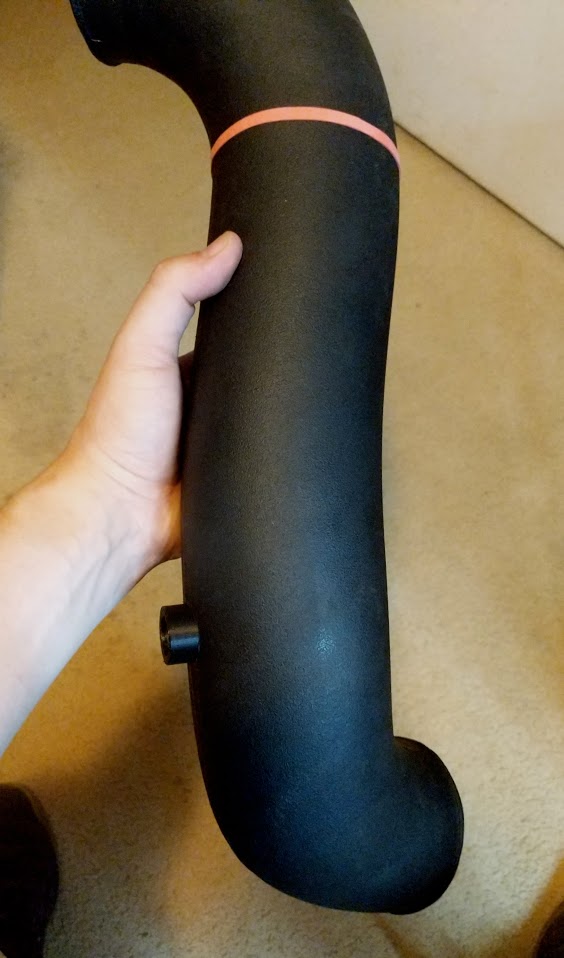 V2 of the bung. I modeled it with contours for both the inside and outside of the pipe so it fits flush both inside and out with the curve of the pipe. I also added the guards and tab to prevent twisting too much like the OEM bung. 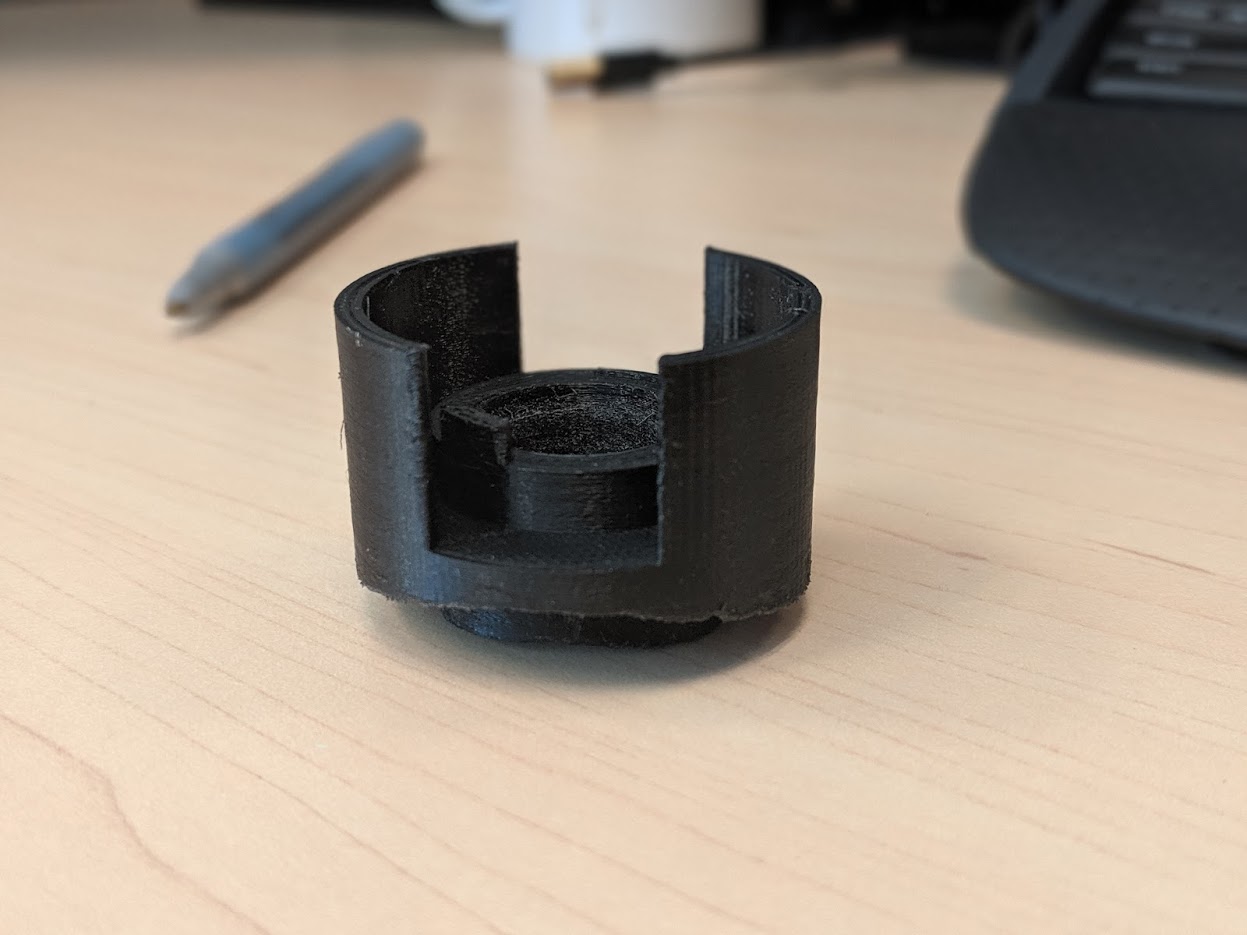 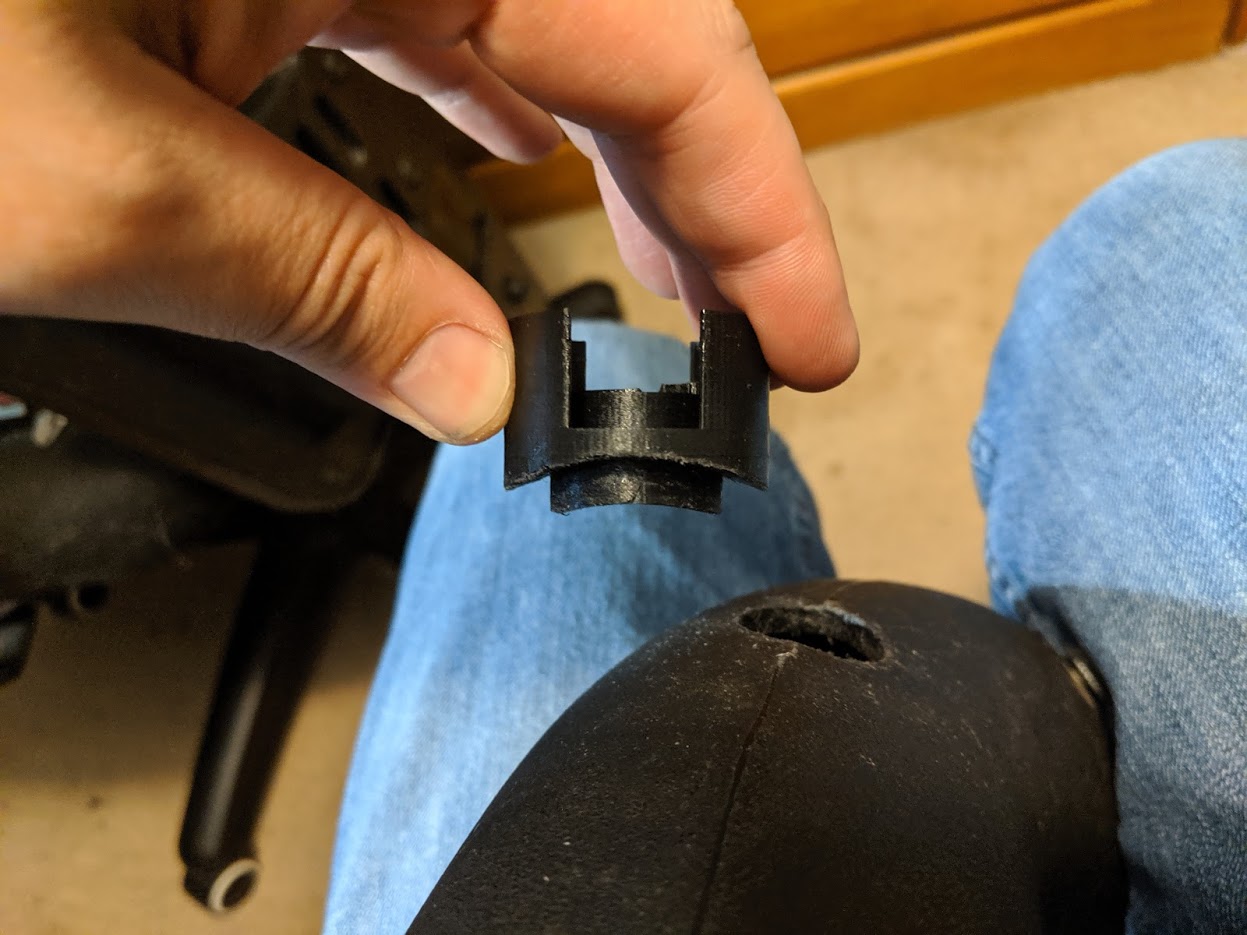 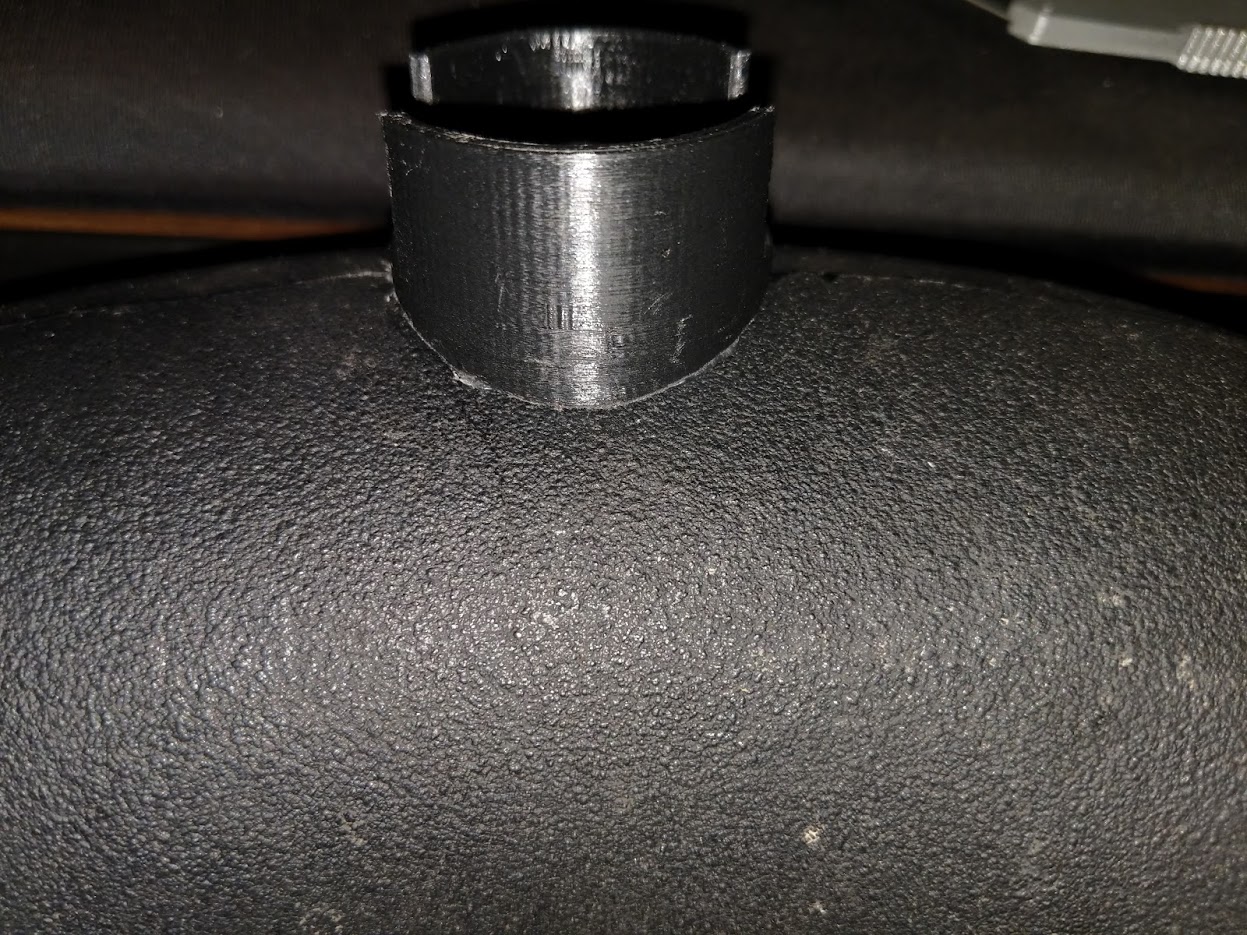 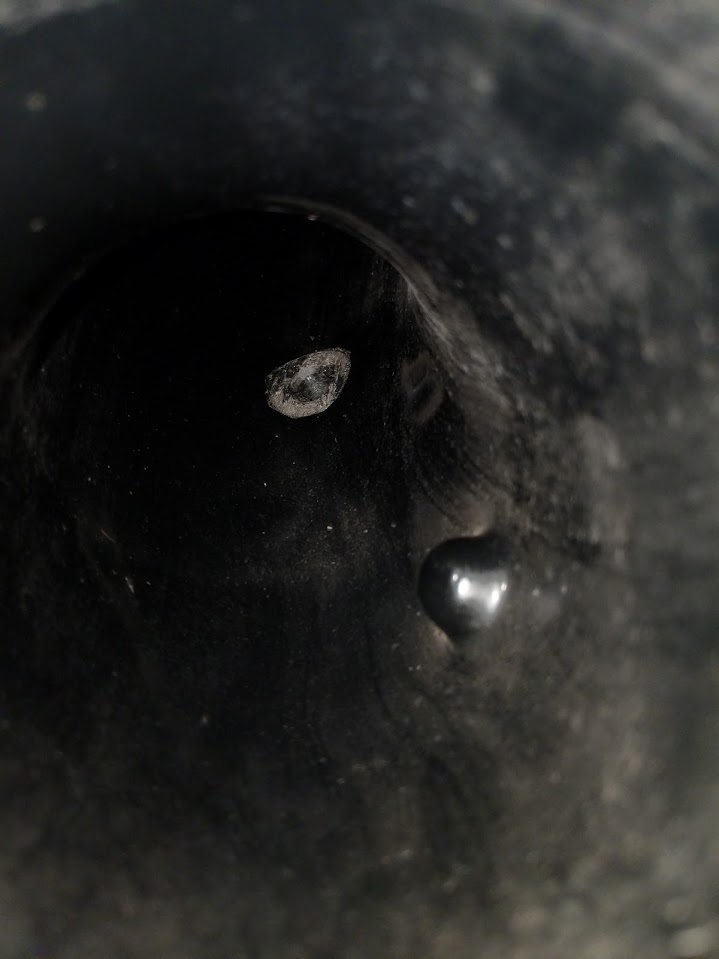 Alright, time for testing fit of the first piece aka "short ram intake mode". Fit great, plenty of room! The temperature sensor is pretty much in the exact same spot as previously.
NOTE: I used a plumbing coupler as a temp piece just to test fitment. Do not use these for actual in engine bay use. They get super soft and start degrading with heat.
NOTE 2: I reinstalled the snorkel from the factory air box (after removing it from factory air box) to use a rest temporarily for the intake. This is not a necessary step, and the snorkel is removed before final assembly as its not needed anymore at that point. It is not easy to remove from the factory air box as well, so don't bother with this unless you feel you absolutely need to. 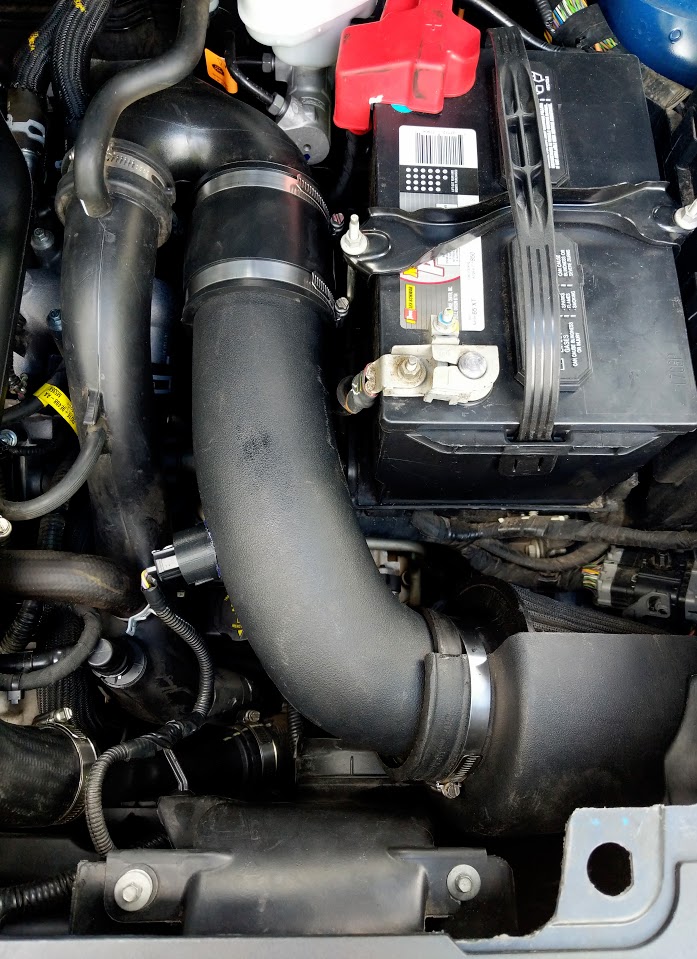 That leaves the other elbow we cut off, which will direct the intake into the bumper area in front of the drivers tire. I printed a plug for the jeep sensor hole, but a 3M Window Welded grommet or something similar would have worked as well. 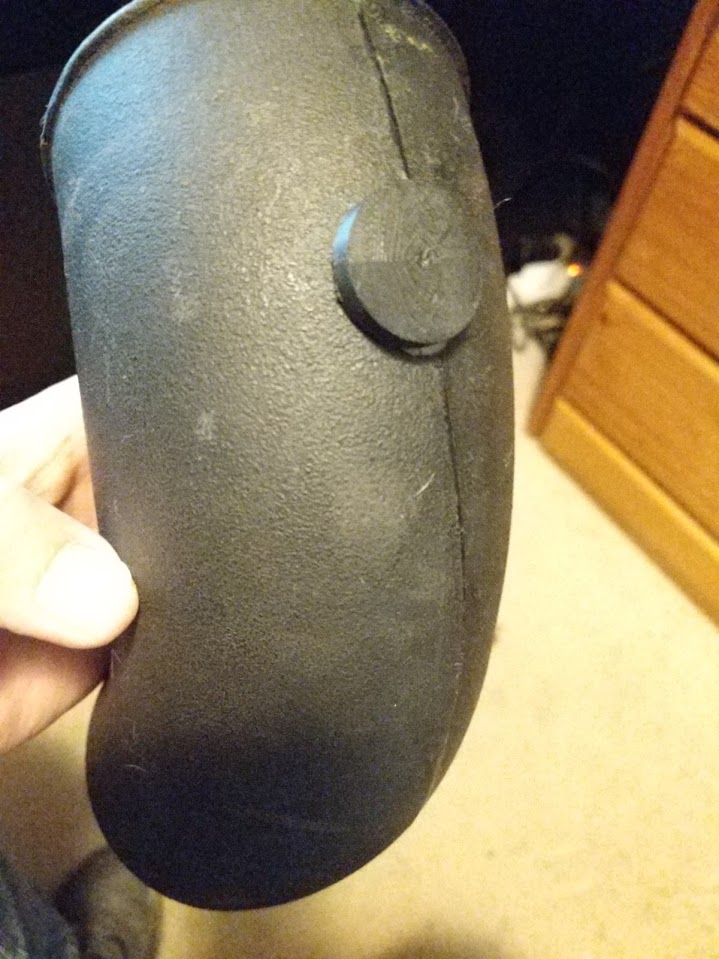 Speaking of 3M Window Weld, that's how the the plug and bung are attached. You will need an adhesive that will stand up to hot temperatures. Something like hot glue is not enough and your bung will fall out. I happened to have Window Weld left over from another project, and decided it would be the best of what I had on hand, but it might be a little overkill. 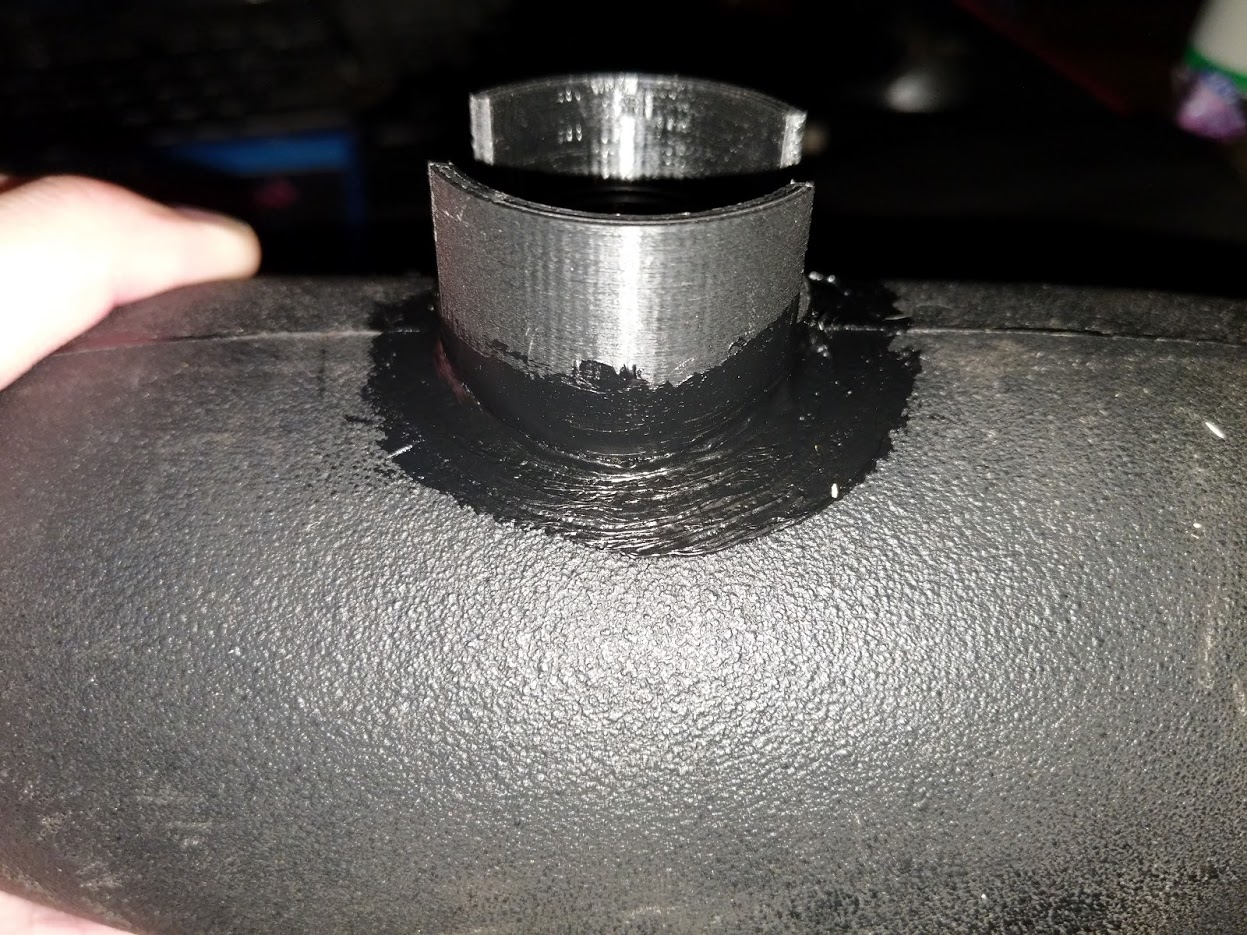 Now the real fun part. Since the intake will be crossing over some of the wire harness, I added some additional protection to those sections of wire. Granted, this isn't really necessary, the intake didn't really touch these cables and they have wire loom on them, but I am always for being safe than sorry. 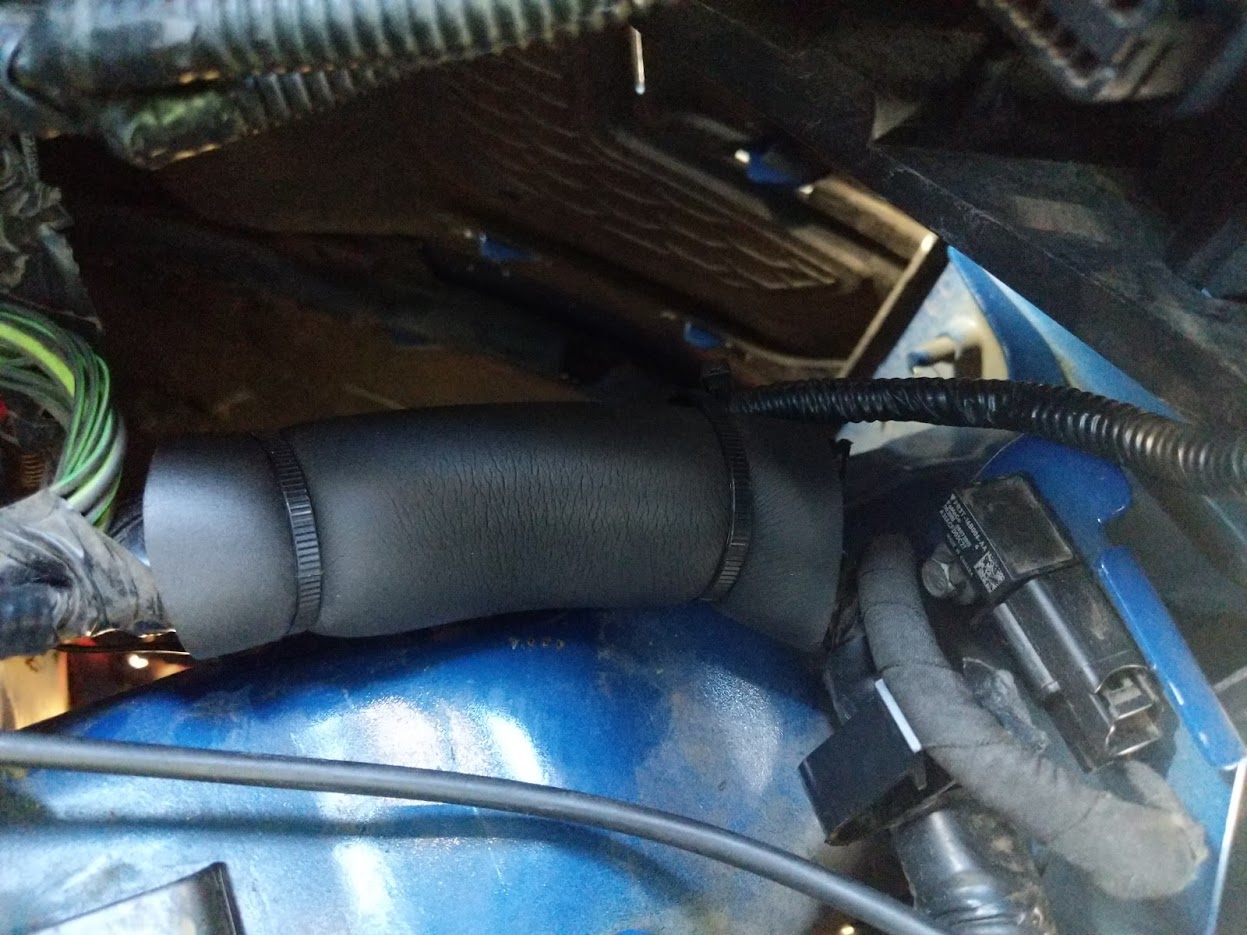 Knowing that space is limited, I assembled the last section of the intake prior to getting under the vehicle. This allowed me to position the shield for optimal air flow/splash protection before feeding it up to the engine bay. 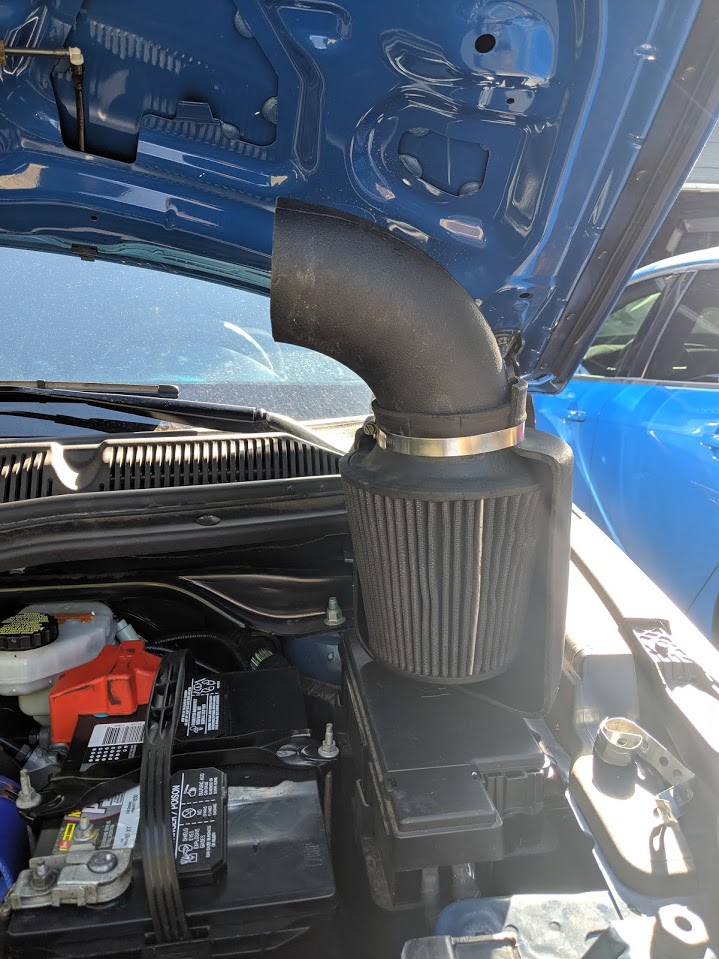 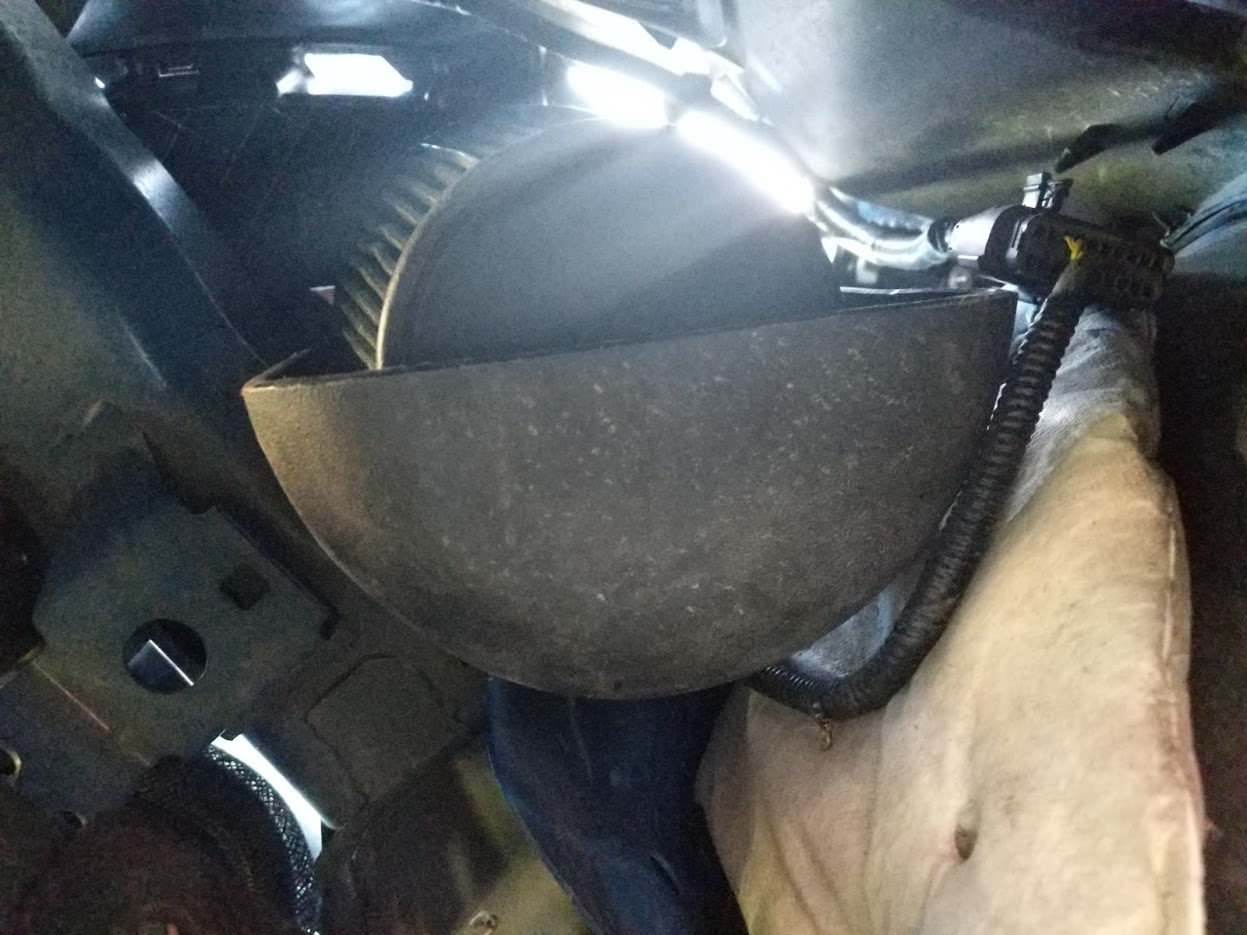 And all together! My 3.5" ID silicone couplers finally arrived from Amazon to assemble (this was during the mass flooding in the midwest a couple months ago). While blue wasn't my first choice, it does match the car, and I was able to get 4 of these couplers for $8 shipped, and 6x 4" worm clamps for $3 more. If I had used black couplers, this would almost look factory. I may change those out one day, but not in a hurry for that and these work fine (reduce lol). 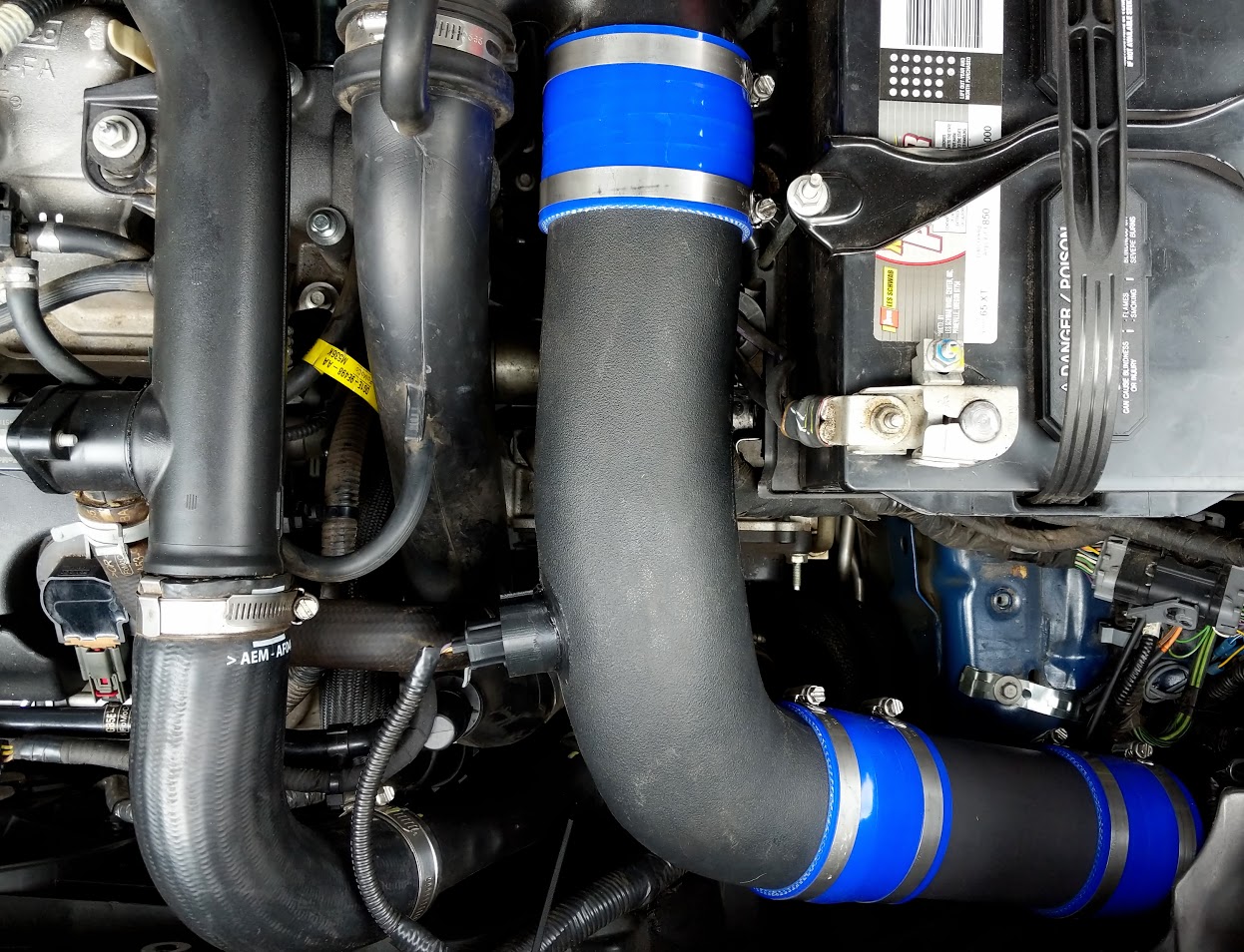 Additionally, I needed one more section of straight pipe here to attach the two pieces of the original intake. Do you know what else has 3.5" OD/3" ID piping, and stands up to high heat (unlike the rubber coupler above), and is the same material pretty much as the intake? Standard ABS piping. I bought a 2' section for $8 at Home Depot, cut to length, and added bevels to the inside edges of the ABS pipe just for some extra reduction in turbulence. This was one of the best reasons to grab an intake made of ABS/plastic. I could get straight pieces for relatively cheap from an easily accessible source, along with that it can stand up in high heat, and doesn't heat soak nearly as fast. I sanded and painted the outside of the ABS pipe with flat black paint, until it matched the rest of the intake at least closely in color/texture. This is a purely aesthetic step, and not necessary, but did make the intake look more uniform.

After final test fit, I removed all the pieces, ran a t-shirt through each of the pipes multiple times, washed with soapy water, and air-dried them with a compressor to remove any potential leftover debris/material that may remain after the build. I highly recommend you do this. You do not want any flakes or debris flying into your turbo or engine, plastic or otherwise.

Total cost: $60
Not spending nearly $300 for a short intake masquerading as a cold air intake and reducing waste: Priceless.

I have driven ~3k miles with this setup, and these are my observations:
Feel free to add any comments or questions, I would be happy to answer them.

Bonus pic to show why i dont mind the couplers too much: 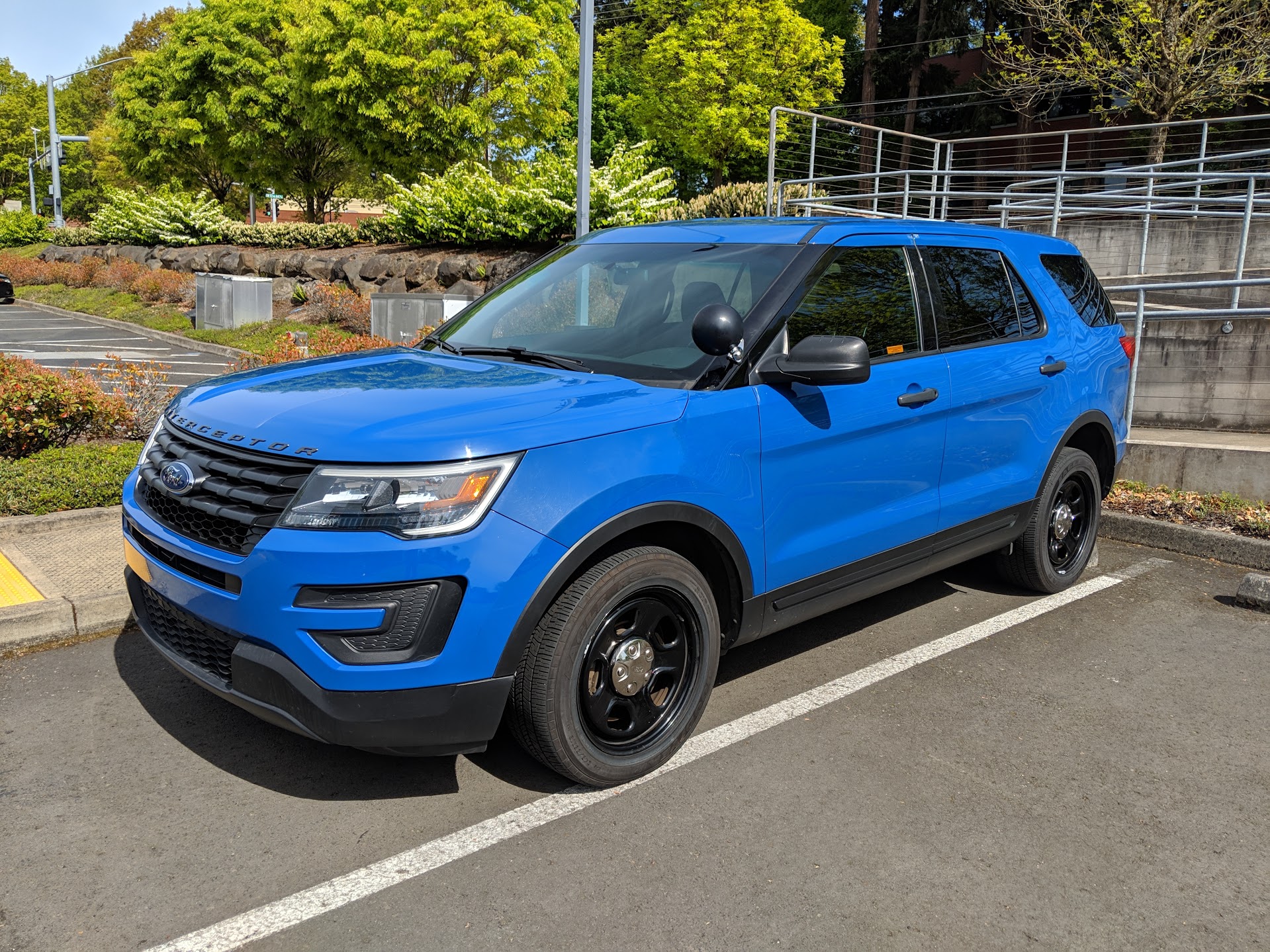 The only picture I see is in the first post (Part 1) and titled "Picture of other side".

Weird, they all show up for me, and they are all hosted on this site?

If they aren't working by tomorrow AM, I'll re-host tomorrow on imgur.

pdxgeek said:
Weird, they all show up for me, and they are all hosted on this site?

If they aren't working by tomorrow AM, I'll re-host tomorrow on imgur.

The only way pictures are saved on the Forum's servers is if you have an Elite Explorer membership ($20).

Clicked on elements and see the pics are hosted by google
Jon
" A mind that is stretched by a new experience can never go back to it's old dimensions"
2000 Mountaineer
1998 Mountaineer "Turdle" ( Sold it)
1993 Convertible "Vitamin D Wagon"( Yeah, I'm an idiot and she's gone too)
Snowflake

Hosting should be fixed now.

Awesome work! Just don't drive through any deep water, but you already knew that.

pdxgeek said:
Hosting should be fixed now.
Click to expand...

I see them now.

Great work, thanks for sharing.

I applaud you for your ingenuity, but in reality that's no better than a K&N.

san~man said:
I applaud you for your ingenuity, but in reality that's no better than a K&N.
Click to expand...

Sure it is. I spent 1/5th price, didn't give K&N money for their overpriced parts, reduced waste, and have a better intake IMO.

pdxgeek said:
Sure it is. I spent 1/5th price, didn't give K&N money for their overpriced parts, reduced waste, and have a better intake IMO.
Click to expand...

But is it really better in performance?

Thank you for sharing.