Transmission fluid change | Ford Explorer - Ford Ranger Forums - Serious Explorations
Menu
Log in
Register
Install the app
You are using an out of date browser. It may not display this or other websites correctly.
You should upgrade or use an alternative browser.

Has anybody done or considered putting a drain plug into the tranny pan to drain fluid instead of the traditional way? The last time I changed fluid and filter I ended up with tranny fluid all over the garage floor, missing the drain pan all together.
BTW, I've got a '96 XLT, 4.0 with the 4R55 tranny.

I did the last time I serviced mine. I got the Dorman plug kit. Unfortunately, it leaked from the actual drain plug so I had to use plumbers tape on the threads. Been fine since. I really don’t like it though. I have little confidence in it since it did leak. I think I may just throw another pan on it and not use a plug. It’s so easy to have the trans pump the fluid out anyway and that saves you from the atf bath.
Life is the Serengetti plain. If you're going to exhibit a limp, you're going to be fed upon. Buckle up and wear a cup.

I’d love to put a Fumoto drain valve in mine. I use one for my oil and I love it. Maybe weld a bung on?
From F/A-18s to Explorers...getting old sucks...

This is what I use with the fumoto valve...

I feel like a welded in bung Is the best option. Preferably tig welded. The Dorman pans with drain plugs have bad reviews on amazon for leaking to.
Life is the Serengetti plain. If you're going to exhibit a limp, you're going to be fed upon. Buckle up and wear a cup.

I’ve got a good TIG setup (TIG welding is some of the best therapy money can buy), so I could weld a bung on. I’d rather not have it sticking out the bottom (road debris). I need to look at the 4R70W pan and see if I can radius a bung and weld it horizontally on a bottom corner low enough to not be left with a bunch of fluid in the pan.

In my 5R55E I use the lines to pump the fluid out and add fresh fluid as I go, as the TC doesn’t have a drain plug. On the 4R70W, i’d prefer to drain and fill since it has the plug. Being able to hook up a hose and drain without dropping the pain is oh so nice...

I suck it up through the dipstick tube with a hand pump then just drop the pan with no spillage
99 explorer xlt v6 supercharged...... Supercharger install .....
The fourth little pig's house was made of wolf skulls. They aren't very sturdy, but they send a message.
Don s...

The 4r70w pan has a sump in the middle that’s the low point. You could just weld the bung on the ramped portion of this sump. It would work out fine. This way it wouldn’t be the lowest point if you’re concerned with road crap, which isn’t really much of an issue. You would be left with just a tad bit of fluid but not much at all. Not enough to take a bath in for sure.
Life is the Serengetti plain. If you're going to exhibit a limp, you're going to be fed upon. Buckle up and wear a cup.

Dropping the pan isn't that hard if you think about it carefully.

I remove all but six bolts first, leaving the four corners and the ones just behind the front two. Then I remove the rear corner bolts, then gently just loosen the other four, holding up on the pan. Slightly bring the pan rear down, just a hair to allow a controlled flow from the back half. Hold the pan up there until the flow slows, and then you can let the pan go. Next run out the two next to the front corners while holding the pan up again, let the pan drop a little again, then hold the pan while loosening the last two corner bolts a few threads, gently letting the back of the pan come down until most of the fluid is out. Push the pan back up and remove the last bolts, and lower the pan easily since it weighs very little with so little fluid in it.

All of that takes just a few minutes if you do it methodically, thinking of how the fluid will come out as the pan seal is cracked open. Just control the amount of opening of the pan and case, as you loosen and remove bolts in the right order. Done right, no fluid is spilled beyond the large drain pan that you should have under it. I use a large plastic pan about two feet long and almost 18" wide, which is about a 20 gallon pan, from Walmart.

I hope you also use a large steel pan below the drain, the shallow type with a lip about 3/8" high, parts stores have those, they are about 2x3 feet in size, and work great for all kinds of jobs like the transmission work.

Mbrooks420 said:
I’m with Donalds. If that pan has to come off the small amount of cash you’ll have in a cheap pump is money well spent. Nothing drops easier than a pan that’s 90 % empty.
Click to expand...

I agree, I "liked" his post before making mine. I might try that next time, I have one of those cheap siphon pumps if it works after doing gasoline a year or two back.
Don
98 Limited"Black Coal", TW 170 heads TEA 205 ported for 337 engine.
99/93 Explorer Limited A4WD, 92 Lincoln LSC/SE/GTC, 98 AWD Mounty.
I support the Fair Tax Plan and the US Constitution.

Yeah, I just don’t always change my filter. I’ll do fluid as close to every 30k as I realistically can, and I leave the filter in there a while. I used to drop the pan and change the filter every time, and then I started cutting the filters open. Clean as a whistle. Then I started asking myself why I was dropping the pan every time, and started doing my 5R55E changes via the cooler lines.

I’m one of those dudes who is just terrible with fluids. I don’t know what it is. I’ll put down cardboard, drip trays, etc...and still get oil on the floor.

My life is a hot mess.

I never even thought of siphoning the trans fluid out of the dipstick tube. I already have a hand pump and I have used it to suck up some extra oil from the crank case. (I had my son fill up the oil after I drained it and he put a little too much in.) Didn't even think of doing same thing for trans fluid. I just dreaded the idea of crawling under the truck with the possibility of taking a shower in ATF.
Thanks every one!

Here is the pump I used $12 at auto parts store 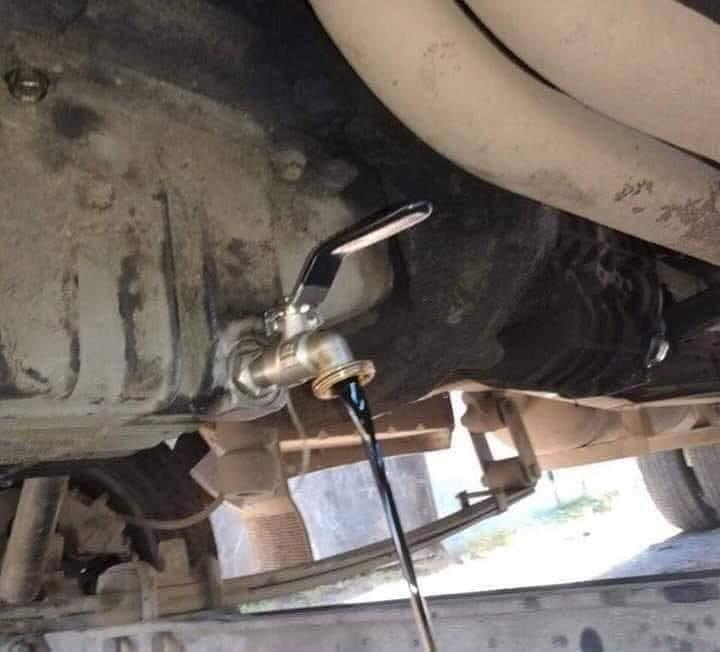 rasouth said:
Has anybody done or considered putting a drain plug into the tranny pan to drain fluid instead of the traditional way? The last time I changed fluid and filter I ended up with tranny fluid all over the garage floor, missing the drain pan all together.
BTW, I've got a '96 XLT, 4.0 with the 4R55 tranny.
Click to expand...

Yes, I've added drain plugs to my 5R55E's and 4R70W trans pans. I used a universal B&M drain plug kit I got off eBay (around $8). No welding necessary. It works great with no leaks. You just need to drill a hole at the pan's low point and make sure the plug's nut doesn't interfere with anything. A pilot hole and a step-drill work best for producing a nice clean, round, flat hole. Or you can just use a cheap transfer pump down the dipstick tube as other's have suggested.

Dorman replacement pans have plugs in them already, pretty cheap too!