Another status update on this RPM issue -

I changed the rear and front differentials with Mobile One gear fluid about 3 weeks ago. The rear differential had a bunch of metal shavings built up on both the fill and drain plugs. It appeared to be about a quarter inch thick of metal shavings on both. The old gear oil didn't appear to be too bad in color though, just a tad bit darker than clean oil. When I did my Rangers several years ago, that fluid was straight black. The following week I did my transfer case fluid using Valvoline Transfer Case Fluid which is suppose to meet the XL-12 specs. The old fluid was very black and burnt looking. I'm guessing the drain/fill plugs on the Explorer transfer case doesn't have a magnet since neither the drain or fill plugs had any metal shavings? I swore my Rangers transfer case did. Anyways, doing the differentials and especially the transfer case, it seems to have significantly helped the RPM surge issue. The issue is still there but the Explorer seems to overcome it a lot easier and makes quicker decisions on up or down shifting. So much better!

Today I decided to poke around the Explorer and was actually testing suspension components. Curiosity got the best of me and I started looking around under the vehicle which eventually led me to wonder about the transmission fluid that I had changed back in February, I believe. I wanted to verify that the fluid level was around where it should be on the dip stick and that the fluid was clean vs the slightly burnt/dull red color when I checked it back in October/November of 2016. Well... this is what I found - 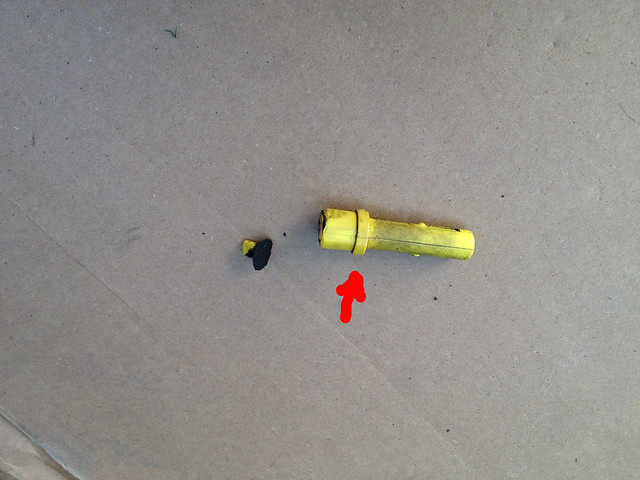 The shop that I've trusted my vehicles with for the last 4-5 years had snapped my dip stick and what appeared to be epoxy to try and mend it back to the base part... on top of that it appears that a piece snapped off. For all I know that other piece is floating around in the transmission somewhere. The epoxy part separated after i tried rubbing the black crud off thinking it was some kind of sludge. The kicker is that when I was checking this, the fluid wasn't even at operating temperature or with the Explorer running, so I'm sure this is a major factor, but the fluid was up to where the red arrow is on the picture. WTF?! I know for fact that the dip stick wasn't broken when I checked it last year. I'm slightly peeved about this and I'm not even sure what I should do. I sure as hell know that I won't be going back there. Oh, and the fluid was bright red so at least that's a plus. I'm wondering if there's too much fluid in the transmission, could this also contribute to the RPM surge issue?
Last edited: September 10, 2017
__________________________________________________________________________
2008 Ford Explorer Limited 4.6L V8 4x4 & 2003 Ford Ranger XLT 4.0L V6 4x4


Join the Elite Explorers for $20. Gets rid of the ads!

The red line you have indicated is where the metal cap would sit when screwed into the case. If your fluid level is up to the top of the case, then it could be overfilled and could cause some unusual conditions. So its possible that you have solved the mystery. Have a vacuum pump to remove some fluid?
The broken "stick" piece if in the pan should not cause any problems. A new dipstick is Part # 6L2Z 7A010 C.
06 Ltd, V8, blk/blk, nav, dvd, quads, mich defender 265/60/18

Bill MacLeod said:
The red line you have indicated is where the metal cap would sit when screwed into the case. If your fluid level is up to the top of the case, then it could be overfilled and could cause some unusual conditions. So its possible that you have solved the mystery. Have a vacuum pump to remove some fluid?
The broken "stick" piece if in the pan should not cause any problems. A new dipstick is Part # 6L2Z 7A010 C.
Click to expand...

So my new dip stick came in today. The wife was driving the Explorer around before hand so it was still hot. As soon as I cracked the plug nut, transmission fluid (very very hot transmission fluid) came spitting out. Luckily I had mechanic gloves on and a SHAM WOW towel electrically taped around my forearm. After unscrewing the plug nut completely, a bunch more dribbled out from the hole. I then checked the level with the new stick and started sucking the transmission fluid out and dumping it directly into my catch pan.

Welllllllllllll.... rookie mistake - I stupidly sucked out a bunch and then decided to turn the vehicle on. Sure enough, the fluid level dropped from maybe 1/8th of an inch from above the hash marks all the way down to like half way down the dip stick. I panicked and ran to Advanced Auto Parts... no Mercon SP fluid and the same story at Auto Zone. So I went back home, empty handed and ashamed of my noobness. I poured the spent fluid from the catch pan into an empty tin can to see if it was clean enough to try and put back in. My catch pan is normally used for oil, but was also recently used for gear fluid. It seemed clean enough and I put maybe a half quart back in until I just couldn't put any more in with good conscious. I started it up and it was still about half an inch below the hash marks... ugh. So I just left it short, but who knows if I even had it up to the right temperature...

Anyways, I drove it around for about 45 minutes getting it in that bog down zone around 35-40 mph. No RPM surge! I still think I need more time in the saddle to say for sure it's gone, so I'll report back in a while with my findings. For now I need to figure out if I want to buy a quart of Mercon SP fluid and try to put some back in. Seemed to be running pretty strong as is.

Over fill causes foaming on trannys normally (bubbles in the fluid). A little low won't be a problem especially if its in the zone. Normal cold check used to be about 70F and I'd look at that level cold and see if you all at that point. There should be a vent from the tranny every fluid area has a vent for expansion in various temp changes. The seals would blow if it got too high and tranny fluid changes a lot more in volume than gear and engine oil when hot.

Depending on that shops setup I'd have go at the manager on that screw up. Dropping the pan would be the only way to get out any pieces there but an intake screen/filter will be there to keep it out of the passages.

PS: You're luck you did not get burnt from the fluid. Ouch....it should not be that hot normally especially with a cooler and not towing either.

Yeah, I'm glad I had that glove and the sham wow towel wrapped around my forearm or that would have hurt like hell. I also had safety glasses on for good measure.

So are you saying that the tranny has a vent to allow air to escape or do you mean like an expansion chamber for the excess fluid to go into? It weird because the last few times I cracked that plug nut I would hear what seemed like gurgling as (I'm assuming) air would rush into the system. I am a bit concerned that I may not have enough fluid in there but for now it seems to be running good.

Every lubed sub system I have seen/had as some sort of vent or expansion chamber. EG ATV axles, engines, trannies There is significant change in volume between -30C and 40C in volume of any fluid and environment. Engineers have to allow for venting somehow somewhere. Having said that I can't say where it is but or implemented. Someone with the factor service manuals my see it. I had Jeep Grand Cherokee and it had a long vent tube from the axles to allow breathing. Hotter subsystem need this as well otherwise seal will blow out for sure.
New to Family
2009 Explorer LTD AWD w/NAV console 4.6L V8 Black

It's been a while since my last update, but I'm ready to FINALLY call this problem solved. I recently started a post about another problem I was having -
Another P2135 Thread - Orange Wrench
Only now do I realize that they are/were related.

A combination of stripping back the protective tape bundling the electronic wires to the TPS sensor, throttle body and MAF sensor (then re-bundling them) and replacing the TPS sensor with a new one finally fixed my RPM surge issue. Messing with the wires changed my "bog down zone" area from 45MPH to 35MPH and the Explorer felt like it had a lot more power available to it. I still had the RPM surge issue after messing with the wires, but it was significantly better than previously and I could deal with it more at 35MPH than 45. After replacing the TPS sensor the issue slowly disappeared after a few weeks of heavy driving. Now I can't even reproduce the problem no matter how hard I try.

The Explorer feels like a brand new car and shifts so smoothly.

Thanks to everyone who offered advice along the way. Even if I replaced some unnecessary parts, I think it was better off anyways. A lot of it was basic preventative maintenance anyways.

Wow, yeah it took a while. LOL
Good to hear a success in any problem resolution. You neglected to mention if any of the wiring clusters had insulation crack in them which some Explorers had causing problems. You appear to have a 2008 from the profile info. If I recall the cracked insulation on others were on earlier years and its not good to hear its still out there. Now whether 2009 got a different harness is something to watch for.