2nd GEN Overhead Interior LED Swap | Page 2 | Ford Explorer - Ford Ranger Forums - Serious Explorations
Menu
Log in
Register
Install the app
You are using an out of date browser. It may not display this or other websites correctly.
You should upgrade or use an alternative browser.

This is a variation from the very good and informative post Interior Dome Light LED Conversion (PICs) by MustangP51.

His post didn't really detail much on wiring and provide a ton of detail on the backseat and cargo lighting and also went the much cooler and more complex method of building his own LED boards I went with the lazy man 10-LED disc boards that work out of the box and cost about $6 each (when you buy 5 at a time on eBay from ledwholesalers. Ooo, and I did mine in red, lol. I have this all in my build thread but figured I would post here.

- Remove overhead console. This is pretty straight forward and involves opening up the sunglasses/garage door opener storage compartment and removing a couple screws and then pulling the console down to disengage 2 hidden clips.

-Set on a work table. My map lights hadn't worked in a long time. Note the burned up flex cable which turned out to be broken in a couple of spots and why neither light worked: 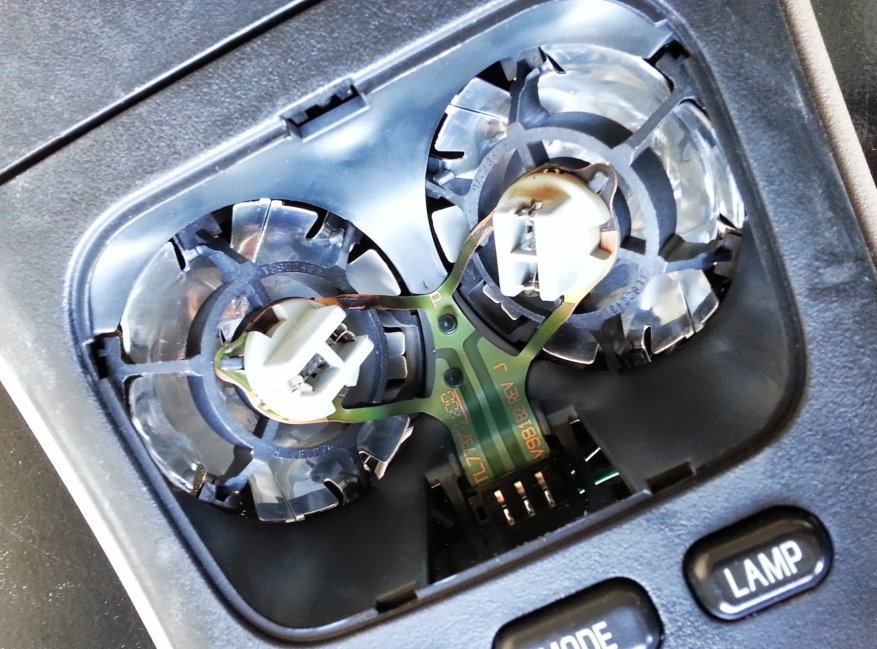 - Pull the stock bulbs out and remove the junk flex cable. Hot glue the 10 LED discs where the old bulbs use to sit but facing outware instead of inward as we will not be utilizing the reflecting cone thing anymore (remove the cone if you want or keep it... I kept it because I'm lazy). This is how it looks with LED's secured in place and sealed with hot glue: 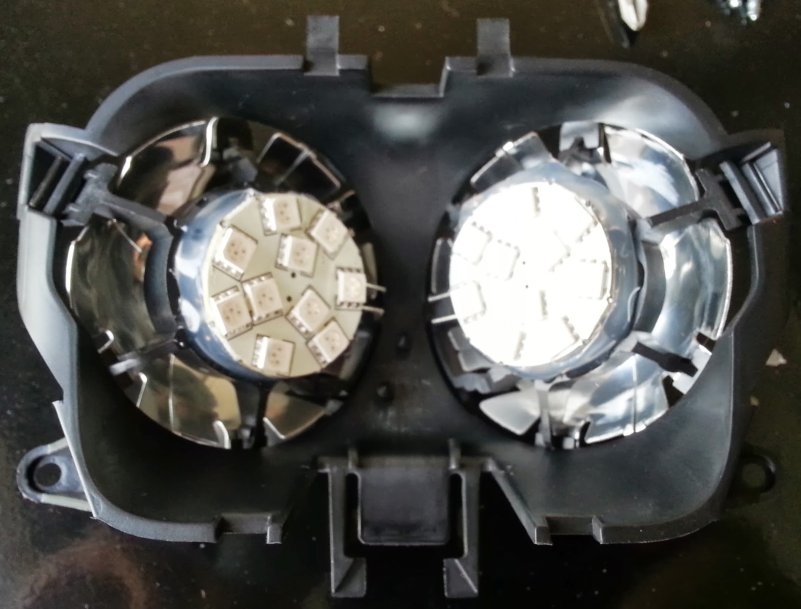 - Splice into the green and red wires from the plug and solder the green to one lead of each LED discs and solder the red to one lead of each LED disc. I used red for everything because I only had red wires, lol. It does not matter which lead you solder to for each as there is no difference in the function of the discs based on which lead you solder to. LED discs installed and back into the console and wired up. Soldered all connectors and sealed with hot glue to help prevent solder joints from breaking over time and/or coming into contact with each other: 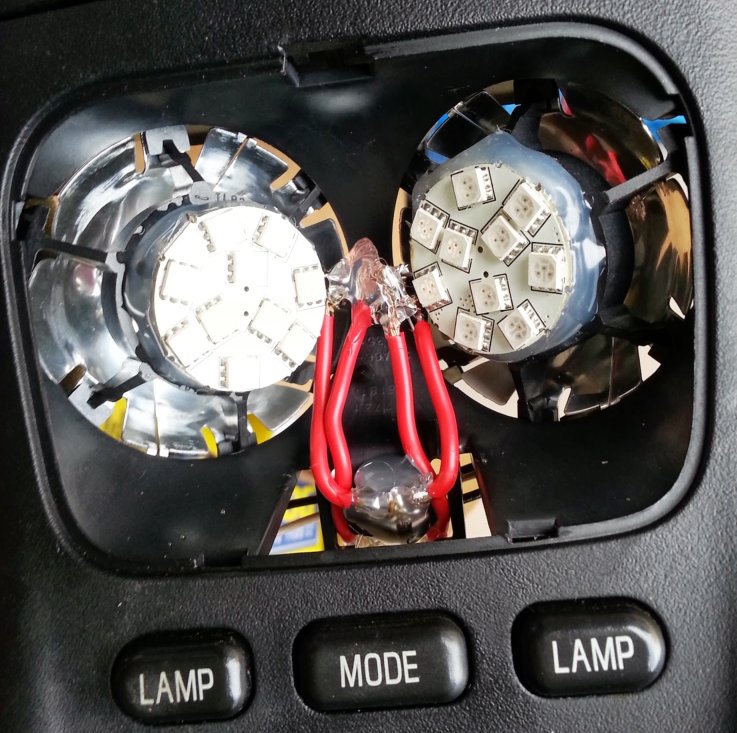 - This is what the back of the console looks like after being wired up: 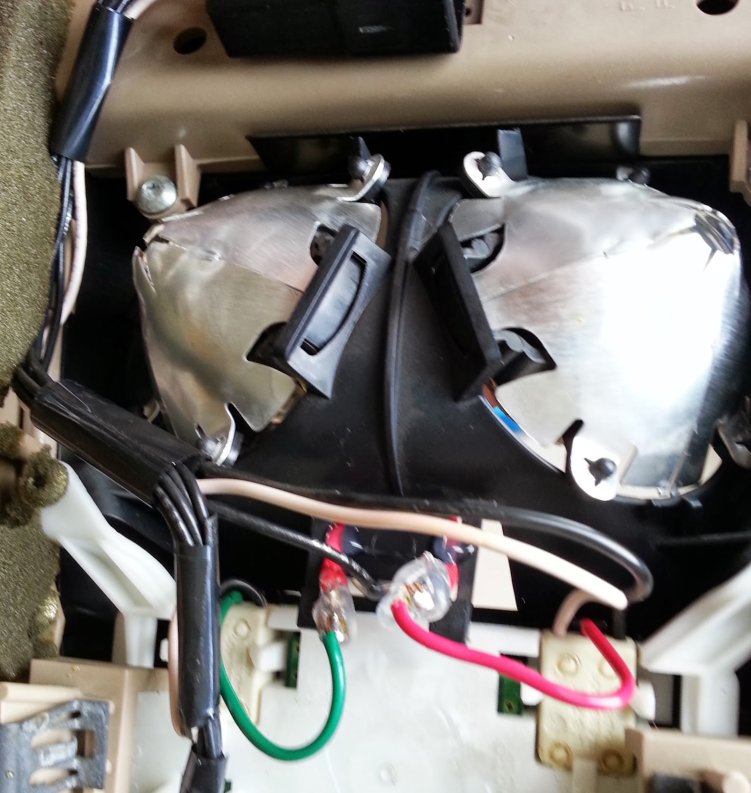 - Overhead map lights lit up after the console being installed back into the roof during the day: 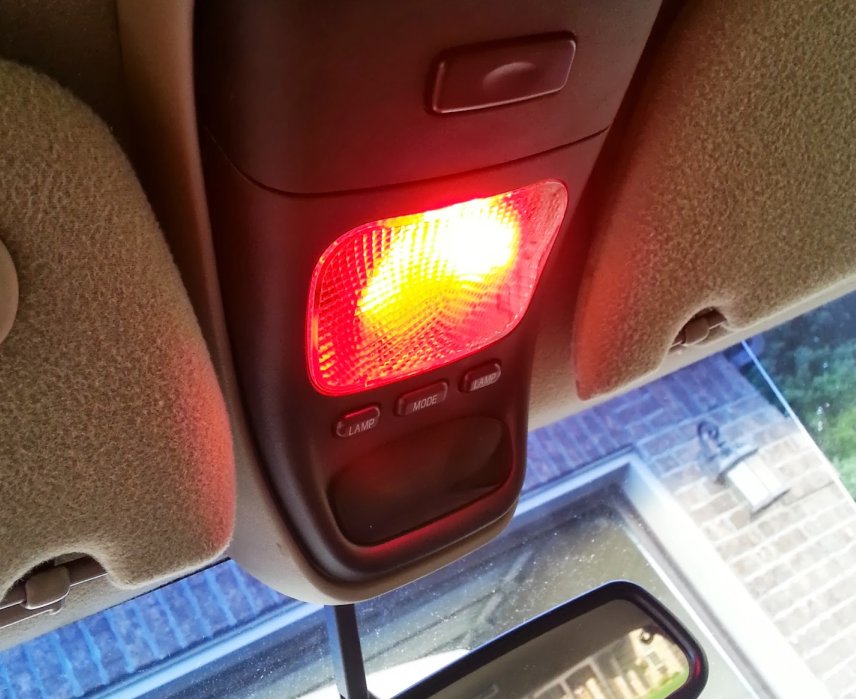 - Overhead map lights lit up at night. They turned out to be quite bright but not overpowering which is what I was afraid of if I had used white: 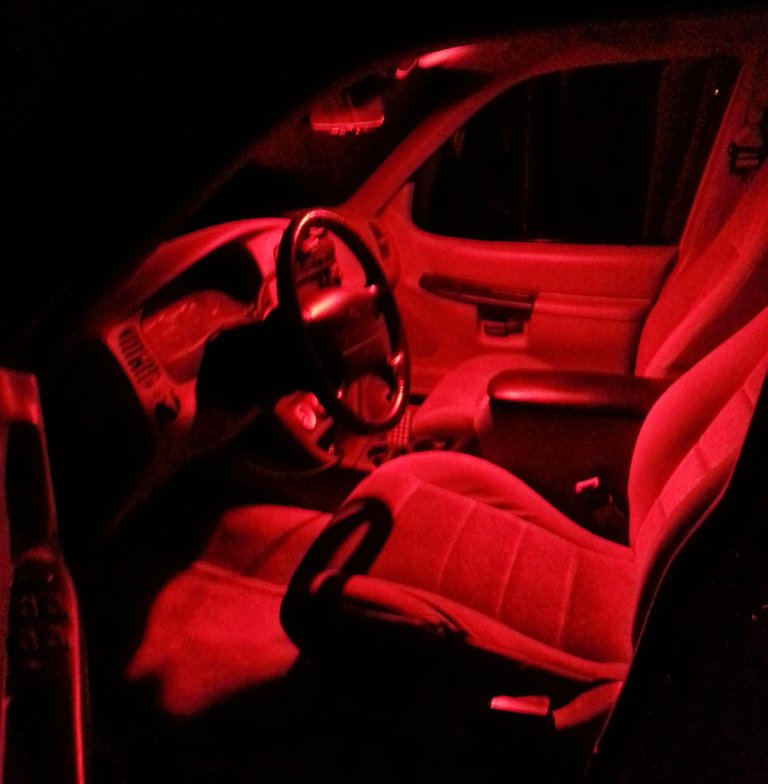 - Getting the console/map unit out was pretty simple... pop the lens off and remove 3 screws and out she goes... No wiring/connectors to disconnect as 2 of the screws themselves makes the connection into a screw female receiver on the roof under the console.

- This is what it looks like out with the map OEM bulbs out and with red 921 LED's already installed: 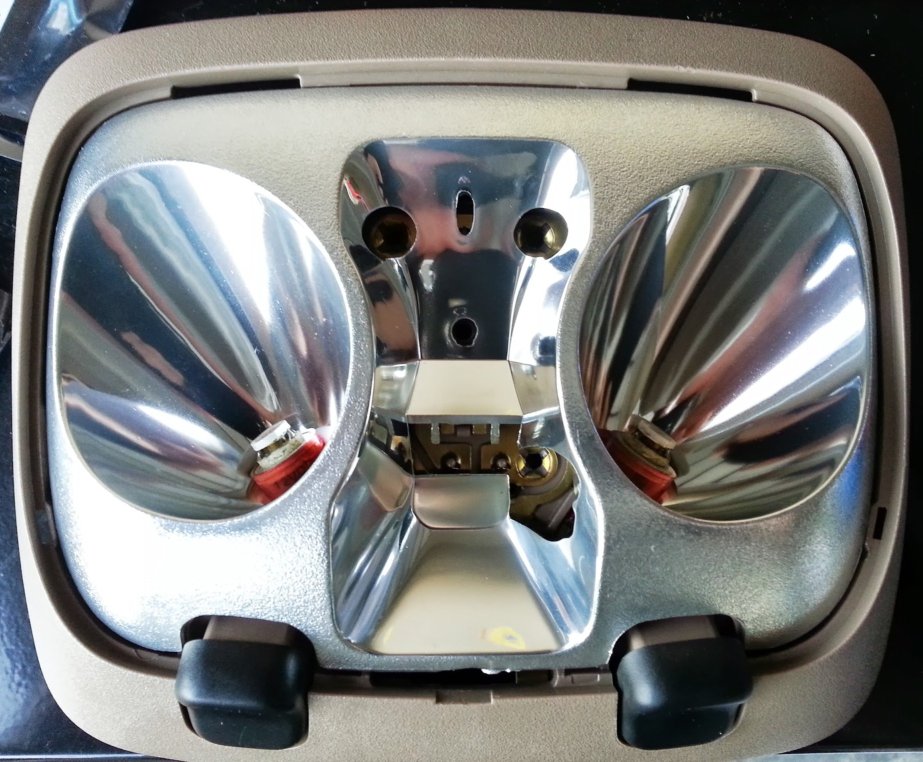 - Because there is no wiring and it is all circuit board type flat flex type stuff I didn't have anything easy to solder to. I ended up taking one of my defective old wedge LED units I had originally bought for my license plate lights and cut the end off that had the LED's mounted to it and then shaved off the electronics leaving just the wedge board. I then wrapped on each side part of a wire and soldered it in place giving me a wedge connector type deal to plug into the socket with wires to solder to for the LED's: 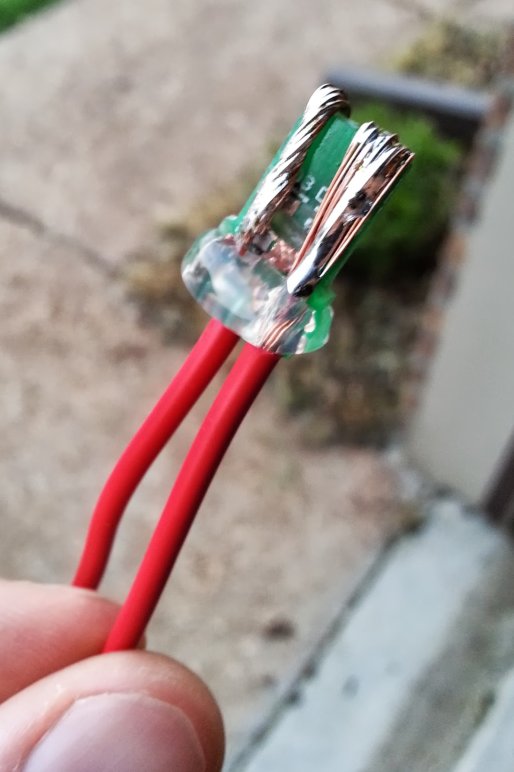 - I then plugged in my wedge socket adapter and added some support glue: 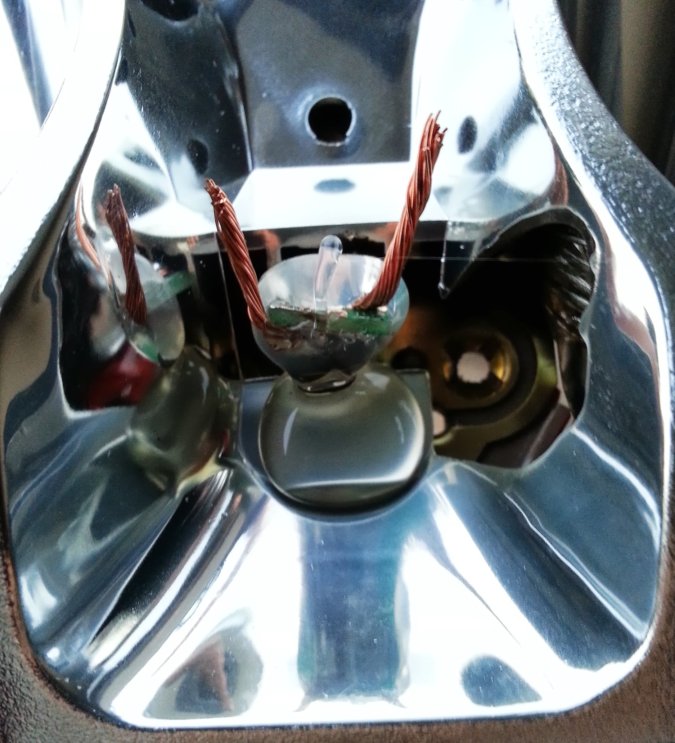 - I'm sure there is a simpler and smarter way to do this but this seemed simple enough and works so I went with it, lol 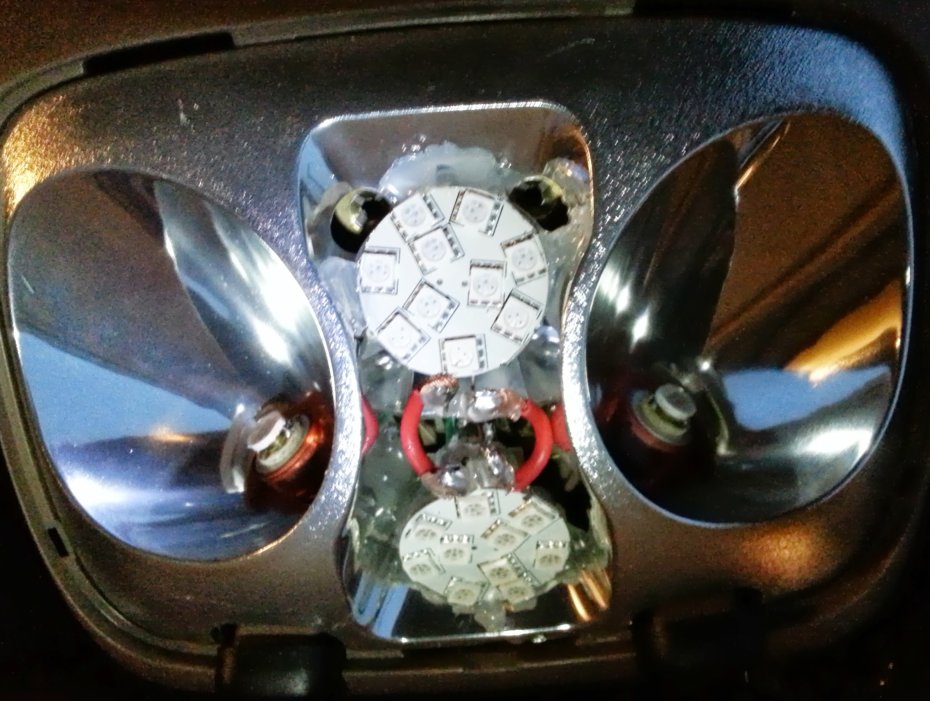 - I was "almost" an idiot and nearly covered the screw holes as I had completely forgot about the whole mounting it back part.. But, thankfully, by luck maybe, I had not covered any of the holes enough to prevent a screw from screwing the console back into place! Be sure to have room to get screws into mount the overhead console back to the root!! Lol.

- And this is what it looks like mounted with the lights on (and the map lights turned on). Ignore the pink hue as that is the result of my fail camera phone and non how it looks in person!: 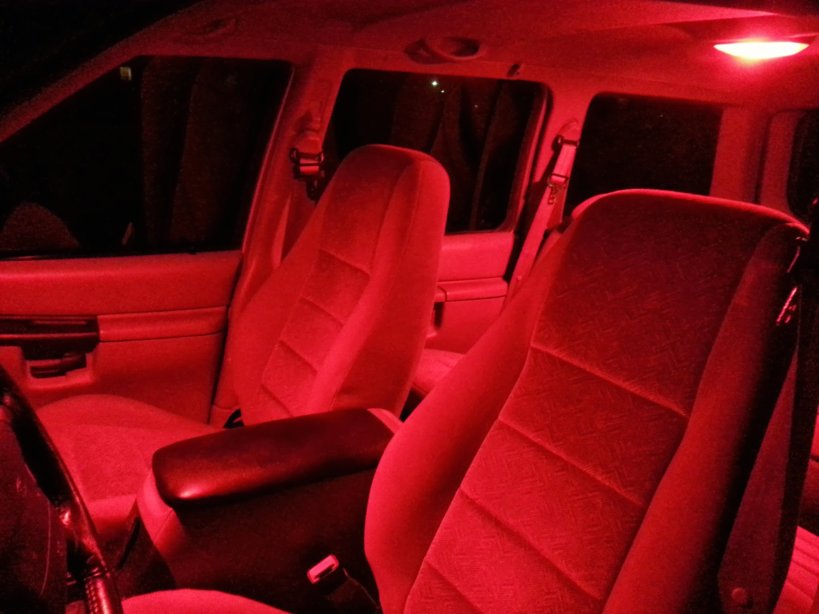 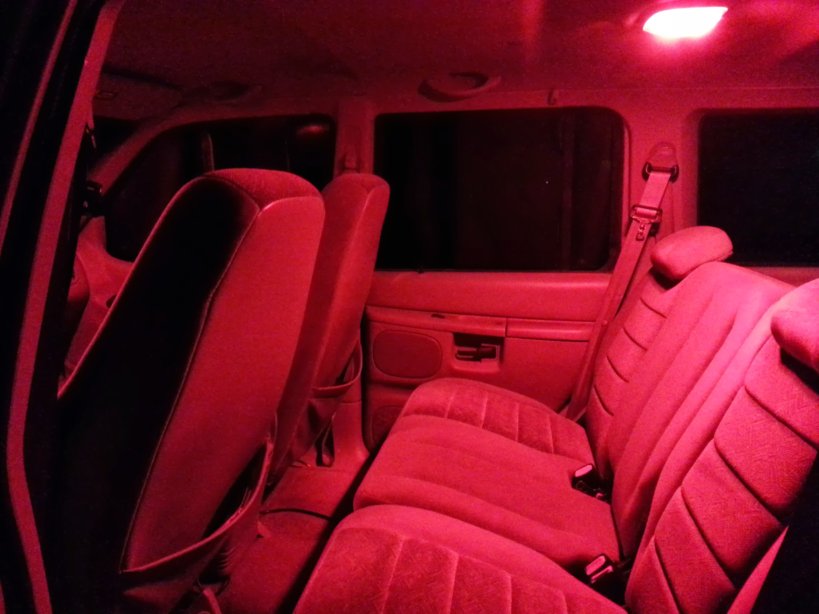 - This part is not too difficult but be careful as the housing seems fragile. My stupid light housing clip thing was broken and had to repair that.

- To remove, stick a flat head in from the passenger side of the housing and push the clip in enough to allow for you to pop the light housing out. Cargo light removed, broken: 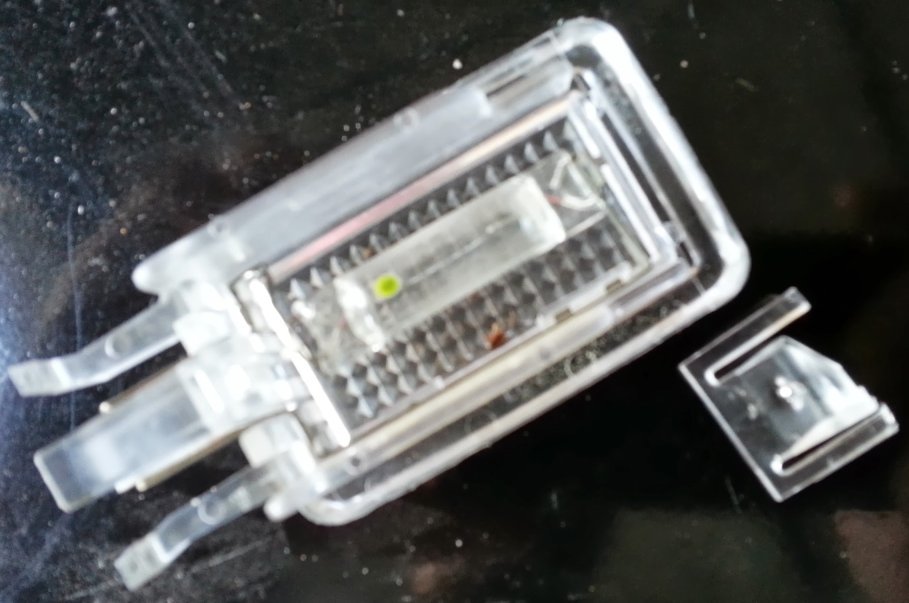 - If broken, it's simple to repair. I removed the festoon bulb and glued in a red 10-LED disc and also added some additional support glue on the housing ends internally. The disc was a little large to fit in flush so had to sit an an angle but still offers enough light radiating downward to be more than enough: 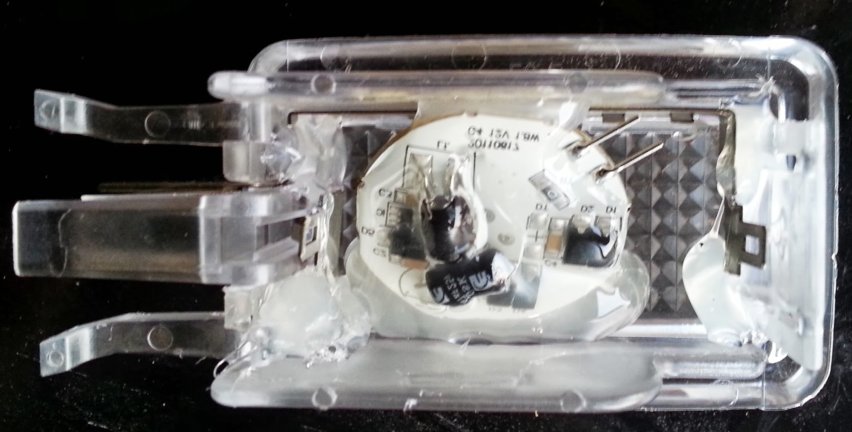 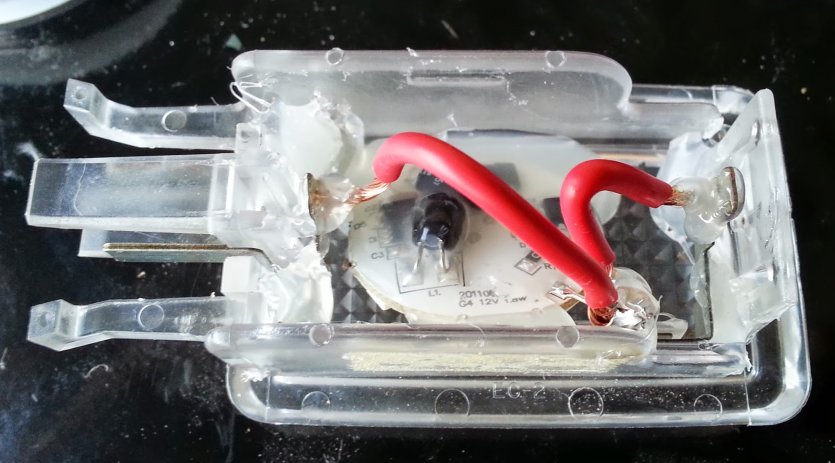 - How it all looks installed and lit during the day: 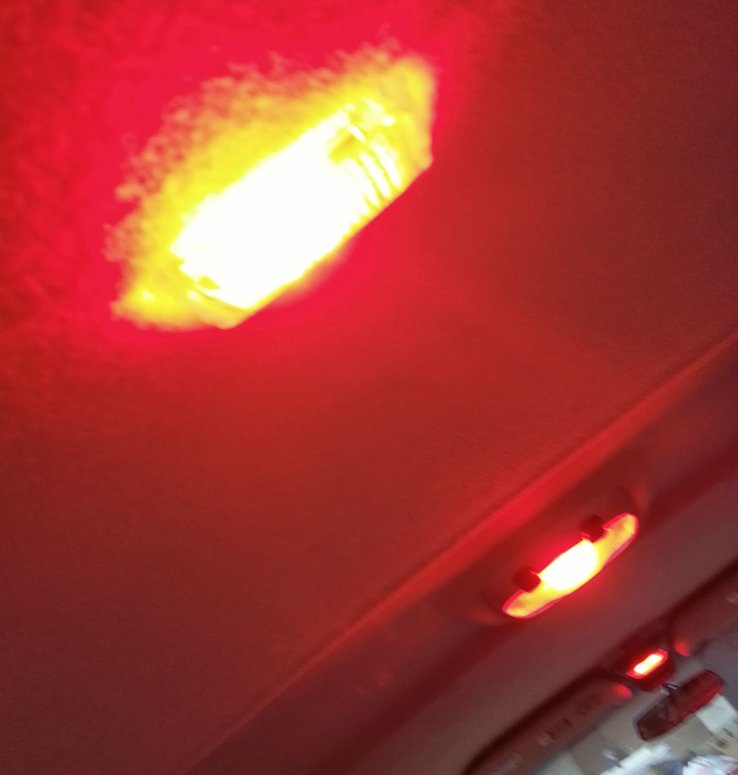 -How it looks at night (ignore the pinkish hue, once again, this is the result of a cell phone camera fail, lol): 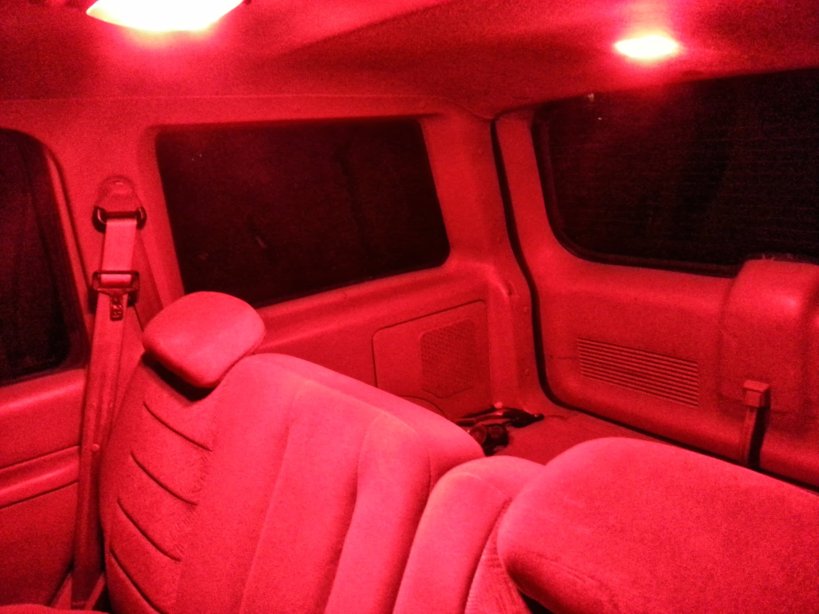 Hope this helps provide some added details for anyone bored and waiting to give the conversion a whirl
Click to expand...

Fixed up the LED lights... 8 years or so in the heat and sun killed the hot glue I had used, lol. Did a conversion overview and repair video